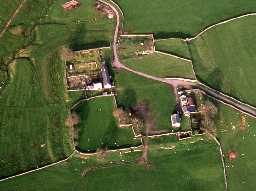 Aerial view of High Rochester Roman fort. Photo © Tim Gates.
The parish of Rochester lies in Redesdale in west Northumberland on the border with Scotland. Much of the parish is high moorland and it lies partly in the National Park and the Otterburn military ranges. From the Romans to the modern day, the parish has had a strong military connection but it is probably best known for its Roman remains.

People were probably living in the parish more than 6000 years ago, during what archaeologists call the Neolithic period. Two stone axes have been found near Elishaw Bridge and Troughend and would have been used to clear woodland and undergrowth, perhaps so crops could be planted. Although we don't know where Neolithic people lived, they buried some of their dead in long cairns. These are quite rare structures in Northumberland, but in Rochester there are two examples, at Bellshiel Law and on Dour Hill. The sites of these cairns may have held some significance for the local people for many years as in the Bronze Age a cist burial was inserted close to the Dour Hill long cairn. Neolithic people also carved symbols on the rock and there is an example of cup marked stones in the parish.

A stone cist under a cairn is the most common type of prehistoric burial found in Northumberland. There are probably many examples in the parish, such as Dour Hill where archaeologists found fragments of skeletons and pottery, but all that is generally visible is the cairn, such as on Ravens Pike and the cemetery at Bellshiel Law. The ritual side of Bronze Age life can also be seen at the Three King's stone circle, where a burial was placed in the centre. Some of the cairns near Yatesfield and Bellshiel Bridge were probably made by clearing stones from newly created fields and the people who made these fields lived in hut circles such as the settlement at Woolaw. Fields with cord rig plough marks at Yatesfield and Nether Houses show that late prehistoric farmers were growing food here.

Rochester lies north of Hadrian's Wall and is littered with Roman remains dating back to the first century AD. This was a time when the Romans were advancing northwards into Scotland along Dere Street and before Hadrian's Wall was built. Alongside Dere Street the army built temporary camps for the soldiers to rest in and at least eight have been discovered in the parish that are still standing earthworks, including Dargues, Sills Burn South, Sills Burn North and Silloans. The Romans also built two forts here, at Blakehope and High Rochester. The remains at High Rochester are very well preserved, with stone gateways and earthwork defences still standing, and archaeologists have also discovered remains of the civilian settlement that stood outside the fort. The people who lived in the fort were probably buried in a nearby cemetery at Petty Knowes where there are at least a hundred small barrows and four monumental tombs. The native people of the area seem to have carried on much as before, living in small farmsteads and cultivating their fields, such as near Yatesfield Hill, Rattenraw Farm and Whitelee.

After the Roman army left Britain nothing is known about Rochester until after the Norman Conquest in 1066. In medieval times, people lived in a village at Evistones and a hamlet at Kellyburn, but few other settlements have been traced. Some smaller settlements are shielings that were used in summer months by shepherds looking after sheep on high pastures and there are records of a hospital at Elishaw. It may well have served the people who travelled the old routeways between England and Scotland, such as Yard Shank and Dere Street, who were guided across the moors by wayside crosses such as Outer Golden Pot, Middle Golden Pot, Inner Golden Pot and Phillip's Cross.

In medieval and early post-medieval times, the border region of England and Scotland was a very unsettled and sometimes dangerous place to live. There were battles and skirmishes taking place on both sides and an obvious need for some defences. Probably the only medieval example in Rochester is at Troughend but the discovery of a sword at Silloans in 1986 shows that personal weapons were also called for.

Later, in the late 16th and early 17th centuries, as feuds between border families arose, some people built special defended farmhouses called bastles. At Evistones at least three bastles were built amongst the remains of the medieval village and at High Rochester two were built within the ruins of the Roman fort.

In the 18th and 19th centuries, when more peaceful times returned to the region, people began to convert the old bastles into less defensive homes, such as Stobbs and the Redesdale Arms Hotel and build new farms such as Yatesfield. Some estates and farms set up boundary stones to mark the edge of their property and at Silloans Farm stones were set up within the farm and suggest that people here were still using an infield outfield system.

As well as farming, which was the staple activity of the parish, there were other industries such as watermills at Byrness and Birdhope, ironstone workings at Featherwood and Harelaw Cleugh, coalmining from bell pits at Ramsey Cleugh, Coal Cleugh and Bennett's Rigg, clayworkings at Bateinghope, and lime kilns at Netherhouses and Bateinghope Burn Quarry. As the country as a whole became more industrialised, new approaches to Christianity developed in many of the industrial cities and in time these ideas spread into the countryside. Known as nonconformists, this new breed of worshippers built plain and simple chapels such as the former Presbyterian Chapel at Birdhopecraig.

At the turn of the 19th and 20th century a major construction scheme was underway in the parish when Catcleugh Reservoir was built for the Newcastle and Gateshead Water Company. One of the wooden cabins used by the workmen can still be visited today.
N13599
UNCERTAIN