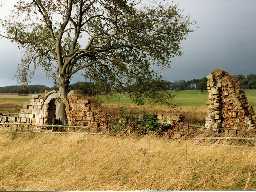 St Leonard's Hospital, Alnwick. Photo by Northumberland County Council.
The small village of Denwick lies in one corner of the parish that, unusually, is divided into two separate areas to the north and south of Alnwick. The southern portion is known as a detached part of the parish. The parish contains a mixture of rich farmland in rolling countryside in the south and east, and higher land to the north and west. Part of the parish lies within the historic parkland called Hulne Park, now part of Alnwick Castle parkland. The ownership of large parts of the parish by the Duke of Northumberland can be seen in many of the buildings of the parish, from boundary stones and farms to the estate village of Denwick itself, many of which bear the Percy crescent carved into their stonework. The name Denwick means 'valley-farm and building' or 'the farm in the valley.'

Long ago, before the Percys held sway in this part of Northumberland there were prehistoric people living in the parish. The earliest evidence we have is a stone axe that belongs to the Neolithic period. A cup and ring marked stone has also been discovered in Black Bog Dene, an unusual place for such a stone. Later, in the Bronze Age, people began to make objects from metal as well as stone and in Denwick an impressive hoard of bronze swords, spearheads and axeheads was found in the 18th century. Other remains, connected to Bronze Age religious or ritual practices, can also be found across the parish. A number of burial cairns and cist burials were discovered in the 19th century. Some, such as the cist found on Greensfield Moor Farm, contained pottery, a flint tool and an inhumation. A standing stone near White House is a mysterious monument. Although we do not know precisely what such monuments were used for, standing stones are quite rare in Northumberland and as such this example is of great importance. Despite all this evidence for how Bronze Age people worshipped and buried each other, no evidence of their houses or villages has been found in the parish. This may be because these settlements were not of such substantial construction and their remains may not have survived more recent farming practices.

In complete contrast, the situation in the Iron Age is the reverse. Now we have plenty of evidence of settlements but no burials. Most of the settlements survive as upstanding earthworks in the northern part of the parish and as cropmarks in the detached portion. The settlements at Heiferlaw, Chester Cottage, West Brizlee and Brizlee Wood are all defensive and surrounded by one or more earthen ramparts and ditches.

Little seems to have changed in the area during the years of Roman rule. Denwick lies well north of Hadrian's Wall, the northern edge of the Roman Empire for much of its time in Britain. Most people probably continued to live in the same kinds of homes as during the Iron Age. One possible slight difference is the shape of the wall or bank enclosing these small farms. In the Iron Age they are usually curved, but in Roman times they are often more rectangular. The farmstead at Rugley is just such a settlement. Here, a quern stone used for grinding grain was found and clearly shows that crops were being grown nearby.

Following the end of Roman rule in Britain in the early fifth century, there is very little evidence for any settlement in the parish until after the Norman Conquest. Yet, there is a hint of some presence in the early medieval period with the discovery of an Anglo-Saxon cross shaft at Hulne Priory. However, it is possible that the shaft was brought to Hulne from elsewhere.

During medieval times the parish was quite densely settled with villages and hamlets documented at Heckley, Denwick, Birtlaw, Rugley and Swineleas, suggesting the area was extensively farmed to support so many people. As well as these settlements there is also documentary evidence of a medieval grange at St Margaret's. A number of other important medieval establishments also lie within Denwick including Alnwick Abbey, Hulne Priory and St Leonard's Hospital. Hulne Priory is probably the earliest Carmelite foundation in England and one of the best preserved. A series of wells lie in the parish, including Lady's Well, Friar's Well, White Well and Malcolm's Well; these may have been used for medicinal purposes or for supplying water and in the case of Lady's Well as a holy well. Malcolm's Well is associated with the death of Malcolm, king of Scotland in battle in 1093, and the site is marked by a cross. In the 15th century, the area suffered from a period of warfare and raids from Scotland and because of this the monks of Alnwick Abbey built Heiferlaw Tower as a lookout. It was during the medieval period that the Percy family began its long held association with the Alnwick area.

The post-medieval period was a relatively prosperous time for the border region of England, despite the visitation of the plague. It swept through Denwick at least twice and its victims are remembered at the White Cross. With the advent of more peaceful times the parks and gardens surrounding Alnwick Castle were developed and landscaped. This was carried out, in part, by Capability Brown who created one of the most notable gardens in 18th century England. Part of these grounds includes Hulne Park, which lies in Denwick parish, and the ornamental Brizlee Tower.

Denwick has been a rich farming area and through the 18th and 19th centuries there was a period of new building at local farms in response to new inventions and farming methods. Planned farmsteads were built at Greensfield, Rugley, East Brizlee, Park Farm and Humbleheugh. This prosperity is also reflected in the number of fine farmhouses built in the parish at Greensfield, Greensfield Moor, Heckley High House, Heckley House and Park Farmhouse. A whole village was planned and built at Denwick in the 19th century as part of the Duke of Northumberland's estate. During this 'Age of Improvement' the popularity of lime as a near universal fertilizer can be seen in the survival of several lime kilns at Rennington Moor Quarry, High Hobberlaw and Alnwick Moor Quarry. Other economic activities included milling at Alnwick Mill and Denwick Mill, rearing doves and pigeons at Heckley Fence, as well as quarrying. Denwick Quarry is first recorded as a source of good freestone in the 16th century and is still open in the 21st century providing stone for Alnwick Castle.
N13222
UNCERTAIN