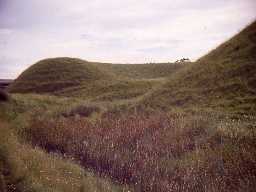 Earthworks of the motte and bailey castle at Elsdon. Photo by Harry Rowland, 1967. 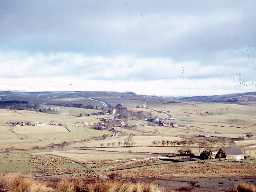 View of Elsdon village. Photo by Harry Rowland.
Elsdon lies in central Northumberland on the edge of the Northumberland National Park. Archaeological remains in the parish date from prehistoric times to the 20th century.

A stone axe from Grasslees is one of the oldest pieces of evidence for people being in the parish. It dates to the Neolithic when people first began to clear trees and undergrowth away to make fields. Evidence of the rituals carried out by Neolithic people come from the discovery of mysterious cup and ring marked stones carved on a rock outcrop at Tod Crag. The oldest structures in the parish date to the Bronze Age and include cairns and ritual monuments. Most of the cairns are clearance cairns, made so that crops could be grown on the newly created fields. Some of the cairns were built as burial places and they sometimes cover a stone cist. Some of the tools or weapons used by Bronze Age people have been found in Elsdon, such as an axe from Eastnook Farm.

The earliest settlement in the parish is probably a round house at Hallshill Farm. The precise date it was built is not known but it was probably in either the Bronze Age or Iron Age. The Iron Age was a time when there seems to have been an increasing level of conflict and people mainly built defended settlements such as at Haining and Manside. The settlement at Manside is protected by three ramparts and two ditches. Inside, there would have been a number of circular wooden houses for an extended family. When the settlement was excavated in 1959, archaeologists found evidence that people lived here in the Roman period too. Life probably changed very little between these two periods, although the houses were rebuilt in stone. The small farmsteads built in the Roman period are generally squarer than their earlier counterparts and some survive as earthworks together with their field systems, such as the Butts on Wether Hill.

The parish lies north of Hadrian's Wall and, although there are Roman military sites in neighbouring parishes at Otterburn, there are none in Elsdon. A Roman tombstone in St Cuthbert's Church is said to have come from High Rochester Roman fort and was found in Elsdon motte.

In medieval times Elsdon was an area well used by travellers along medieval, and possibly even older, routeways, such as the Elsdon to Gamelspath road. Their paths were marked by wayside crosses, such as Manside and Steng. At this time people lived in hamlets, villages and farms, such as Raylees. Elsdon village grew up around the motte and bailey castle built here after the Norman Conquest in the 11th century. Unfortunately the castle was too remote and its role was taken by Harbottle Castle in the 12th century. The 12th century also saw the first church built in Elsdon.

The medieval period was also a time of warfare between England and Scotland and those who could afford it built defensive homes. Elsdon Tower was originally built in the 15th century for the rector of Elsdon. It was rebuilt in the 16th century and is one of the best tower houses in the county.

Reivers continued to make the border regions of England and Scotland a troubled place to live into the 17th century. Again, those who could afford it built defended farmhouses, called bastles, to protect themselves and their animals from attack. Some of these buildings have survived, such as at Townfoot converted in later centuries for more comfortable living, and Ottercops and Whitlees which are used as farm buildings. Another, at High Bowershield, lies in ruins.

The 18th century brought a more peaceful way of life to the area and people began to build less defensive houses and took on new ideas in farming. The parish registers record many farmsteads in the parish, including Heir's House Dunshield, The Haining and Low Carrick. New farm buildings were built in Elsdon village at The Crown. This is one of several former inns in the village, including The Bacchus and The Bird in the Bush that would have provided accommodation and refreshments to travellers along the new Jedburgh to Newcastle turnpike, which opened in 1776. The cockpit at Elsdon would have provided sport to locals and travellers. The boundaries of landownership seem to have been formalised at this time and a series of boundary stones was erected between Ottercops and Kirkwhelpington. Alongside farming, other economic activities developed, including: millstone quarrying at Peterstone Flow; corn milling at Whiskershiel, Cresswell Lees, Elsdon and Overacres; and lime quarrying and burning at Dunshield and Bowershields.

In modern times, a radar station was built at Ottercops in World War II (1939-1945) and was protected by four anti-aircraft artillery sites.
N13750
UNCERTAIN