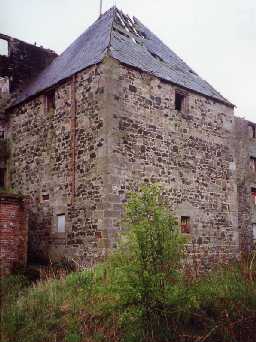 Waren Mill. Photo by Northumberland County Council.
The coastal parish of Easington, in north Northumberland, stretches from Budle Bay in the east to the crags of Chesters Hill near Belford. Craggy outcrops of rock also lie in the centre of the parish where prehistoric settlements stand. The parish has a range of prehistoric and later archaeological sites and is also the home of the mythological Laidley Worm.

The earliest evidence of human activity in the parish belongs in the Mesolithic period. This was a time when people moved across the land gathering food and hunting. At Easington they left some tools, such as scrapers, blades and microliths at Spindlestone Crags, Budle Crags and Ross Links. Little has been found here from the Neolithic period, except for a barbed and tanged arrowhead at Ross Links, where excavations also discovered Bronze Age pottery and a burial.

People began to lead a more settled way of life in the Bronze Age and started to farm the land. Their tools, such as the bronze axe from Mart Field, show they were clearing land of trees and undergrowth to make fields. Although we don't know where these people lived we do have evidence of the ritual side of life and death as a number of burials were found at Spindlestone in the early 19th century, together with pottery vessels.

The Iron Age gives us our first glimpse of prehistoric settlements in the parish. Two of the settlements were built for defence, at Spindlestone Heughs and Kippy Heugh. They both stand on crags that give some natural protection and have ramparts on the remaining sides.

Easington is well north of Hadrian's Wall and life probably changed little in the Roman period. People may have carried on living in some of the Iron Age settlements such as the camp at Easington Quarry.

After the Roman army left Britain nothing is known about Easington until medieval times. By this time several small villages and hamlets had grown up in the parish, including Easington, Outchester and Spindlestone. At Outchester there was also a moated site and at Spindlestone Heughs is the site of St Eligius Chapel. Until relatively recently, traces of the medieval fields survived as ridge and furrow earthworks in many parts of the parish but most have now been lost to the plough. During the medieval period the area suffered from periodic warfare and raids with Scotland. A tower was built at Outchester, and possibly also at Easington Grange and a hoard of silver pennies may have been buried for safekeeping and then lost.

The post-medieval period was a relatively prosperous time for the border region of England. This was (and still is) an area of rich farmland and in the 18th and 19th centuries new inventions and farming methods called for a different kind of farmstead to be built. At Spindlestone and Chesterhill new, planned farms were created as well as fine farmhouses such as Easington. During this `Age of Improvement' lime became popular as a near universal fertilizer and lime kilns once stood at Spindlestone and Easington Demesne. As well as farming there were other related economic activities, such as milling at Waren Mill where a watermill had stood since medieval times, and a dovecote for rearing doves and pigeons at Spindlestone. The 19th century also saw the arrival of the railway together with the construction of Belford Station in the 1840s. Almost 100 years later World War II (1939 to 1945) defences were built in the form of pillboxes on Chesters Hill and Cragmill Hill that were part of the Wooler to Belford stop line built in about 1940.
N13743
UNCERTAIN