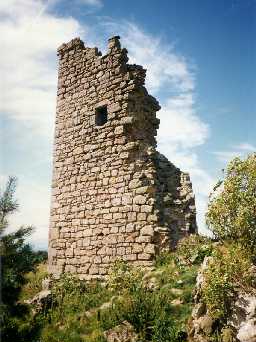 Duddo Tower. Photo by Northumberland County Council.
Duddo parish lies in north Northumberland on the border with Scotland. It has a rich variety of archaeological sites, with numerous cropmarks, and important monuments and buildings from the prehistoric, medieval and post-medieval periods.

The earliest evidence of a human presence is the burial and ritual monuments built by Bronze Age people more than 4000 years ago. Three different burial places have been discovered here so far. Two of these were under mounds of earth and stone, called burial cairns; one had seven stone cists in it and the other had three pottery vessels buried in it. The third burial site lay inside a stone circle called Duddo Four Stones, where a cremation had been buried in a central pit. Although there must have been people living here at this time, modern agriculture has left no trace of their houses or settlements.

The Iron Age gives us the opposite picture as we get our first glimpse of the way people lived over 2500 years ago but no sign of their burials and ritual side of life. They lived in enclosures surrounded by ramparts or banks; sometimes these were defensive and placed in prominent hill top locations, but many occur in lowland areas. These were small farmsteads where an extended family group may have lived and worked and some may have continued largely unchanged into the Roman period. In the Iron Age enclosures are usually circular, or rounded, in shape such as Camp Field and Twizel Redhouse In the Roman period they become squarer such as at Cartersford Bridge. Such settlements survive as cropmarks in Duddo and are only visible from the air. Only one of them might have been built for defensive reasons, at Mill Hill where a promontory has been used to provide natural defences overlooking the River Till.

Duddo lies well north of Hadrian's Wall and there are no Roman military sites known in the parish, although the Devil's Causeway Roman road lies only a few kilometres to the east. Likewise, there is nothing known of the early medieval period in the parish.

The main settlement today is Duddo village, but this was only one of three of four villages in the parish in medieval times that belonged to the Bishop of Durham and his estate of Norhamshire. People also lived at Grindon and Felkington and another village seems to have existed at Twizell although the documentary evidence suggests it may be 16th century in date. Farming would have been the way of life of most people at this time and a series of cultivation terraces survive as earthworks just north of Duddo village.

People living in this area also had to contend with the ravages of warfare between England and Scotland in medieval times and those who could afford it built defensive towers to protect themselves. The ruins of Duddo Tower are one of the most prominent historic features in the parish, standing on crags south of the village. It was first destroyed by James IV of Scotland in 1496 but repairs meant that it continued to provide protection until the late 16th century. Other medieval tower houses were built at Grindon Rigg and Twizel, the latter being turned into a folly in the 18th century. Twizel also lay on the English army's route to the Battle of Flodden in 1513 and soldiers probably used Twizel Bridge to cross the River Till.

The 16th century saw many border skirmishes, such as the Battle of Grindon in 1558, and reivers continued to make the border regions of England and Scotland a troubled place to live into the 17th century. Those who could afford it built defended farmhouses, or bastles to protect themselves and their animals from the reivers such as at Felkington. However, these struggles had settled down by the 18th century and people began to look to a less defensive way of life and started to invest in their surroundings. At Twizel Sir Francis Blake started to build a gigantic folly and mansion house was built by Thomas Watson at Grindonrigg. Farming also began to develop more productive and innovative methods and series of fine farmhouses and planned farms were built in the 18th and 19th centuries, such as Tiptoe and Shellacres. Other industries sprang up, such as coalmining at Greenlaw Walls, and the railway age arrived in the mid-19th century with the York, Newcastle and Berwick Railway and the construction of a viaduct near St Cuthbert's Farm.
N13635
UNCERTAIN