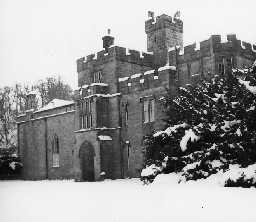 The Manor House, Brinkburn. Photo Northumberland County Council, 1958.
The parish of Brinkburn lies in central Northumberland and is divided by the River Coquet. At its western end the parish stretches from just outside the fringes of Rothbury along the valley of the Coquet to Weldon Bridge. In the north, the parish lies on rising ground on the edge of Longframlington Common. The name `Brinkburn' probably means `Brynca's burn, burh or spring', or `the burn, burh or spring beneath the brink or hill'. And, to digress a little, Brinkburn is said by one tradition to be the burial place of the Northumbrian fairies.

Although there may have been earlier inhabitants, the first evidence we have for human activity belongs to the Neolithic. Bronze Age, with the discovery of a cup marked stone. In the Bronze Age most evidence comes in the form of burials, with cists and cairns having been found at either end of the parish. Other finds include an axe, found at Thistleyhaugh by metal detecting. The remains of any settlements associated with these burials will have been destroyed by later agricultural activity in the area.

It is only in the Iron Age that we get our first glimpse of how and where prehistoric people lived. There are two settlements of this date in the parish, both located on hilltops; one is a promontory fort above the medieval priory, and the other is a camp or enclosed settlement near Pike House. The promontory fort lies in a strong defensive position, surrounded by steep slopes and a loop of the River Coquet. The other settlement is not as strongly defended but nonetheless is enclosed by two banks or ramparts with a ditch between them. It is likely that these settlements were once surrounded by field systems but their remains have been lost by later agricultural activity.

The Roman road called Devil's Causeway, a branch of Dere Street, crosses the eastern part of the parish on its route between Hadrian's Wall north of Portgate and Learchild Roman fort. The only other evidence of a Roman presence in the parish has been the discovery of two brooches. The importance of these discoveries lies in the possibility that they may suggest the route of another Roman road along the River Coquet connecting the Devil's Causeway with Dere Street.

Like many parts of Northumberland there are no monuments or finds from the early medieval period. It is only after the Norman Conquest that we can once again recognise remains of the past in the parish. The medieval remains are dominated by the presence of an Augustinian priory on the banks of the River Coquet. An old road and bridge which lie nearby are also thought to be contemporary features. There may have been hamlets at Healey and Brinkheugh but there is little or no documentary evidence for any other medieval settlements in the parish.

The medieval and post-medieval periods were troubled times in the Border regions of England and Scotland, with countless raids and skirmishes. A possible tower at Hope and bastles at Brinkheugh and Butterknowes attest to the insecurity felt by the inhabitants of the parish at this time. The bastles would have provided shelter for a family and their livestock from the Scots and local outlaws. As the Border region became more peaceful in the 17th and 18th centuries some of these buildings, such as Brinkheugh, provided the focus for less defensive houses. With the demise of the priory a manor house was built within its precincts in the 16th century and remodelled in the early 19th century.

Evidence of post-medieval economic activities include coalmines at Healey Cote, Forestburn, Lee and Pauperhaugh; an iron ore mine at Pauperhaugh associated with Brinkburn Ironworks; and a lime kiln. The 18th and 19th centuries saw a period of new building at local farms, for example at Butterknowes, New Houses, Healey and Healey Cote responding to new inventions and farming methods. The 19th century also saw the arrival of the railway with the route from Rothbury to Morpeth passing through the west of the parish.

Remains from the 20th century include a series of World War II pillboxes that are part of the Coquet stop line. They were built in 1940 to prevent enemy penetration inland and examples survive at West Row, Brinkburn, Brinkheugh and Pauperhaugh.
N12999
UNCERTAIN