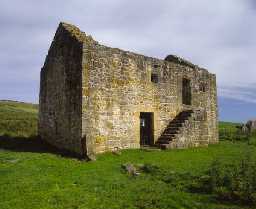 Black Midden's Bastle (Copyright © Don Brownlow)
Tarset is a predominantly upland parish with little lowland except in the valley of the Tarset Burn around Gatehouse and a portion of the broader North Tyne valley near Donkleywood.

The oldest finds from the parish are a Neolithic dagger and a rich Bronze Age burial cist with grave goods found near The Sneep.

Tarset reputedly lies at the end of the Black Dyke, a possible Iron Age boundary that runs for several kilometres from the North Tyne to the South Tyne. The dyke is not a continuous bank and ditch and is debateable and little known.

In the Iron Age and Roman periods a few small settlements existed in Tarset. An irregular enclosure at Highfield might be the remains of an Iron Age settlement. Other, squarer enclosures were built in the Roman period at Cleugh Head, Sidwood and Camp Cottage and survive as earthworks. They were probably home to an extended family.

The remote and secluded nature of the North Tyne valley and its tributaries, including the Tarset Burn, were used to the fullest extent in medieval times. In the 16th and 17th century, feuds and infighting between border families meant that this was a wild and lawless place with intermittent but damaging raids and general destruction. The only form of defence were the defensive farmhouses called bastles built along the valley, such as Tarset Castle, Shilla Hill and Black Middens ' the last of which is in the care of English Heritage and open all year. As well as cattle, sheep and horses, medieval farmers grew crops and fodder was kept above ground on stack stands, for example at Bankshiel Walls.

As the border region of England and Scotland became a more peaceful place in post-medieval times further changes occurred. The remoteness of the parish was recognised by the church when the enormous parish of Simonburn was broken up and Tarset was provided with a new parish church at Thorneyburn. In addition to the spiritual needs more material needs were dealt with; these included lime kilns to improve the land at Tarset and lead mining at High Green Manor and a fashionable country house was built at Highgreen Manor. The Border Counties Railway passes through part of the parish although no branch lines developed to serve the needs of the small local quarries.
N13764
UNCERTAIN