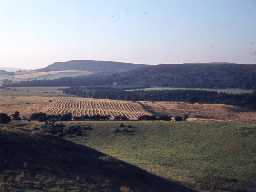 View over Eglingham parish towards Old Bewick (Bewick parish). Photograph by Harry Rowland.
Eglingham parish lies in north Northumberland, not far from the North Sea coast. It has a varied landscape ranging from moorland to rolling farmland with many well-preserved archaeological monuments dating from prehistoric period onwards. Apart form the village of Eglingham, the present settlement pattern is one of scattered farmsteads.

Little is known about the parish in early prehistoric times and the first piece of evidence belongs to the Neolithic or Bronze Age. This was a time when people began to lead a more settled way of life and when farming began. At Charlton Mires they left behind two flint flakes showing that flint was worked to make tools, perhaps for hunting or preparing food; and a bronze spearhead from Shipley Farm may have been a prized weapon. Although we don't know where Bronze Age people lived in the parish there is lots of evidence to show where and how they were buried. Cairns, barrows and cists have been discovered containing remains of inhumations and cremations together with pottery vessels and other objects. One of the largest cairns was excavated in South Charlton where ten burials were discovered.

In the Iron Age we get our first glimpse of where prehistoric people lived in the parish. A promontory fort and two other settlements, in Camp Plantation and Honey Hill, were built for defence, all choosing strategic locations on a hillside or promontory. Other settlements may have stood on the glacial mounds that run alongside the present A1 trunk road but their features are now mixed up with medieval ridge and furrow earthworks and are difficult to distinguish. There were probably farmsteads on lower ground too, whose features have been flattened by ploughing and land improvement in more recent times.

Little probably changed in the area during the Roman period as Eglingham lies well north of Hadrian's Wall. Two small settlements on Beanley Moor are typical of this period with stone-built enclosures and hut circles.

After the Roman army left Britain in the fifth century AD little is known about Eglingham until medieval times. The parish seems to have been quite densely settled with small villages and hamlets such as Harehope, Eglingham, North Charlton, South Charlton, East Ditchburn, West Ditchburn and Old Shipley. This suggests the parish was extensively farmed to support so many people. The surviving part of the open field system at North Charlton shows the characteristic medieval pattern of ridge and furrow cultivation. The spiritual side of life also seems to have been well served as there are records of a medieval chapel at South Charlton, the Chapel of St Giles at North Charlton, and the parish Church of St Maurice at Eglingham that dates back to the 13th century. Another important medieval establishment was the leper hospital at Harehope.

However, these were also times of warfare and unrest in the border region of England and because of this a tower house was built at South Charlton and at East Ditchburn for the protection of the villagers. Feuds between border families continued into 16th and early 17th centuries and those who could afford it built defensive homes called bastles to protect themselves, such as The Old School House at South Charlton.

The post-medieval period was a relatively prosperous time for the people of the border region of England and, with the arrival of more peaceful times, people invested more in their surroundings. A number of new farms were built in the 18th and 19th centuries in response to new inventions and farming methods, such as Cockhall. This prosperity is also reflected in the number of fine farmhouses built in the parish at West Linkhall, East Ditchburn, and West Ditchburn, as well as the country houses of Charlton Hall, and Eglingham Hall. During this 'Age of Improvement' lime became popular as a near universal fertilizer. It would have been made and prepared on the farm in a lime kiln such as once stood at Shipley West Field and Tarry Farm. Roads were also improved at this time and a number of new bridges were built over the Shipley and Eglingham Burns.

More recently, during World War II (1939 to 1945), a series of pillboxes were built around the village of Eglingham.
N13744
UNCERTAIN