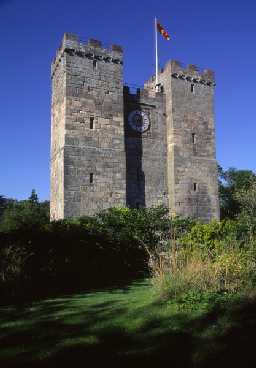 Preston Tower (Copyright © Don Brownlow)
The parish of Ellingham lies in north-eastern Northumberland, close to the North Sea coast. Its landscape is varied and falls from moorland in the west to rolling farmland in east. The village of Ellingham lies roughly at the centre of the parish and is surrounded on most sides by remnants of its medieval field system. The name Ellingham probably means 'the homestead of Ella's sons.'

Little is known about the parish in early prehistoric times. A flint core from Wandylaw Moor is the earliest piece of evidence for human activity in the parish and dates to the Mesolithic period. This was a time before farming was introduced and the core would have been the source of other smaller pieces of flint used for hunting animals and preparing food. However, so far none of these other tools have been found.

Evidence for the Neolithic in Ellingham is limited to a number of mysterious carvings connected with ritual or religious practices. Known as cup and ring marked stones, some examples can be found on Wandylaw Moor. The Bronze Age is, by comparison, rich in standing remains and finds. This was a time of change when people began to make tools out of metal as well as stone. The discovery of a polished stone axe hammer and a bronze axe in the parish show this well. Whilst these tools may have been used to cut timber or clear undergrowth, the fields were prepared by clearing stones from the ground surface. They were heaped into piles, or cairns, such as those which survive on Wandylaw Moor today and sometimes these cleared areas can also still be spotted as 'smooth' areas of the moor. A possible burial cairn and cist has been found near Doxford Farm. Although we have evidence about where people farmed and were buried at this time there is only a hint of where they lived. This is a possible hut circle set amongst the clearance cairns on Wandylaw Moor.

In Ellingham, the Iron Age and Roman periods are both poor in remains. Little probably changed in the area during the period of Roman rule as Ellingham lies well north of Hadrian's Wall, the northern edge of the Roman Empire for much of its time in Britain. A small settlement at the eastern edge of the parish may be from this period and is the sub-rectangular shape characteristic of the Roman period.

Following the end of Roman rule in Britain in the early fifth century, there is very little evidence for any settlement in the parish until after the Norman Conquest. Yet, there is a hint of some presence in the early medieval period with the discovery of an Anglo-Saxon hanging bowl in Newham Bog.

In medieval times the parish was quite densely settled with villages and hamlets documented at Tinely, Preston, Newham and Ellingham, as well as a moated site at Ellingham. This suggests the area was extensively farmed to support so many people. Traces of the medieval field system survive as earthworks in fields at Ellingham where the characteristic pattern of ridge and furrow can be seen. There are also records of a medieval chapel at Ellingham, dedicated to St Mary, and well dedicated to St Maurice. However, these were also times of warfare and unrest in the borders of England and Scotland and because of this a tower house was built at Preston.

The post-medieval period saw the beginning of more peaceful times and was a relatively prosperous time for the border region of England. A number of new farms were built in the 18th and 19th centuries in response to new inventions and farming methods. This prosperity is also reflected in a number of fine farmhouses built in the parish, such as Wandylaw and Newham South Buildings as well as the country houses of Newham Hall and Preston Tower. During this `Age of Improvement' lime was almost universally used as a fertilizer. It would have been made and prepared on the farm in a kiln such as the one that survives as an overgrown mound at Coldrife. A number of industries also developed alongside farming. On Wandylaw Moor, there are coal workings and a series of hollow ways that were probably used to transport raw materials, as well as a millstone quarry. The 19th century saw the arrival of the railway, with the opening of the line from Newcastle to Berwick and the station at Chathill is still in use today.
N13250
UNCERTAIN