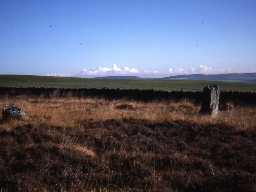 View over Doddington Moor. Photo by Northumberland County Council, 1990.
Doddington parish lies in north Northumberland. It rises from the Milfield Basin up to a sandstone ridge, where there are crags and rocky outcrops, and a more level area with gentler east facing slopes. The parish is rich in prehistoric remains and is perhaps best known for its cup and ring marked stones.

Mesolithic hunter-gatherers are thought to have roamed through the landscape; they were temporary occupants, following animal, bird, fish or plant resources wherever they were available. Mesolithic finds have been made across the parish at Doddington Wood and the Milfield Basin.

Doddington is rich in Neolithic remains. These are the well known, but mysterious, cup and ring marked stone that lie on Dod Law, Gled Law and perhaps most spectacularly at Roughting Linn. The motifs range from single cups to more complex designs with rings and long grooves. The meaning behind the motifs is unknown, but they are widespread and common in the area.

There are a number of Bronze Age ritual sites in Doddington. They include a stone circle and standing stone on Doddington Moor as well as burial sites at Doddington House and Cox Graves. With the exception of an axe hammer few tools have been found.

The oldest settlement in the parish lies beneath Fenton Hill Camp. Archaeological excavation of the camp shows it began as a simple farmstead enclosed by a palisade in the late Bronze Age or early Iron Age. It was later enclosed by ramparts, becoming a typical small hillfort with many circular huts inside. Archaeologists also found traces of early farming with remains of cord rig ploughing discovered beneath one of the ramparts.

Several other Iron Age settlements stand on high ground at Dod Law West, East Dod Law and The Ringses as well as at Roughting Linn. Excavation at Dod Law West showed it was occupied into the Roman period with little alteration and similar continuity seems to have happened at a settlement north-west of Doddington and at The Ringses. The Roman road known as the Devil's Causeway runs along the eastern side of the parish and it may have brought trading opportunities to the communities living in the settlements mentioned above.

In medieval times, people lived in villages and hamlets at Doddington, Nesbit and Fenton. A graveyard and chapel was built at Fenton and the Church of St Mary and St Michael at Doddington. Other buildings were built for defensive reasons. Called tower houses they offered protection against the Scots during the wars with Scotland. A 15th century list of the defences records towers at Nesbit and Fenton but neither has survived. Later, in the 16th century, a strong house was built in Doddington village and this is one of the best surviving examples in the county.

The 18th and 19th centuries were more peaceful times and the need for defence had passed. New farmhouses were built at Doddington South Farm and East Fenton. Changes during the Agricultural Revolution were brought about by people such as George Culley and his brother Matthew, who established themselves at Fenton. The Culleys were amongst the forefront in sheep breeding, developing the Border Leicesters as well as drainage, water meadows and technological developments. They were not alone as in this part of Northumberland, called Glendale, farmers and agents were quick to adopt and develop the new practices.

Industry developed around the natural resources of the parish, such as sandstone and coal. The large sandstone quarry at Doddington Quarry had its own tramway to haul stone away, destined for markets in Scotland. Coalmining was carried out at Kemping Moss using bell pits.
N13838
UNCERTAIN