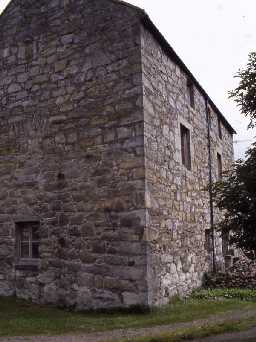 Thropton Bastle.
Thropton is a small parish on the north bank of the River Coquet in central Northumberland, upstream from Rothbury.

The earliest remains in the parish date to the Neolithic period, when people carved some mysterious cup and ring marks on rocks and stones high above the river near Westhills Camp, Westhills and on Chirnells Moor. These carvings echo others on the other side of the valley, such as the Horsehoe Rock at Lordenshaws.

On the low-ground by the river are remains of a cairn, probably dating to the Bronze Age. So far, this is the only evidence of human activity in the parish at this time.

Although the Iron Age in unknown in the parish, much of it is overlooked by the large hillfort called West Hills. The rich lowlands that it overlooked may have supplied food but no farms have yet been found. Little seems to have changed in the Roman period and no settlements or finds have been discovered in the parish.

The oldest known settlement in the parish is medieval. Thropton was recorded in the 13th century and a pair of gallows is said to have stood here. Above Thropton a hospital dedicated to St James was built at Wreighburn and the site of two crosses in Thropton may also be connected with the hospital. The threat of attack during the English-Scottish wars drove some to build fortified tower houses such as Thropton Tower. Further troubles were brought to the borders of England Scotland in the 16th and early 17th century by reivers. Thropton Bastle is a defended farmhouse built to protect people and their livestock in the one building.

As a more peaceful way of life returned to the parish in post-medieval times developments in agriculture took place in the 18th and 19th centuries. New farm buildings were built at Thropton Demesne and near The Peel. A pumphouse was built to raise water for Warton Farm 500m away in neighbouring Snitter parish. As communications improved the need for reliable river crossings was met when Thropton Bridge was built in 1810. New approaches to Christianity also developed at this time. This nonconformist version of Christianity resulted in a large number of small, unpretentious chapels being built, designed to contrast with the extravagant and ornate churches associated with the Church of England. Thropton had its own United Reformed Church showing how important it was that every community had access to a place of worship.
N13813
UNCERTAIN