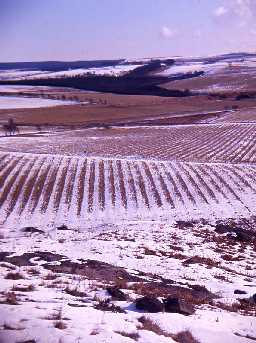 View over fields at Rothley. Photo by Harry Rowland. 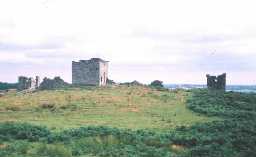 Rothley Castle (Copyright © Keys to the Past)
Rothley is a small parish in mid-Northumberland. Large parts are rough upland grassland and heather moor together with part of the forestry plantations of Harwood Forest. Much of the upland parts have been improved for arable and livestock farming and the rocky outcrops have been quarried for limestone.

The oldest settlements in the parish are Iron Age or Roman. The Stell sits on crags but lower lying settlements are known in the west of the parish at Birky Burn and Ottercops Moss where traces of early farming have been recorded, known as cord rig.

In medieval times there were settlements at Hartington and Rothley. Rothley shrank in later years and the earthwork remains of fields and building platforms can be seen today. An 11th century small jet cross was found at Rothley in the 1990s. The chapel at Hartington has given its name to Chapel Farm where a medieval grave slab has been built into one of the walls. The Stell was used in medieval times as a beacon to warn the parish of any raiders. More defensive measures were taken when Rothley Tower was built in the 15th century and later a bastle at Low Fairnley and Hartington Hall.

With the end of hostilities across the English-Scottish border in the later 17th century, owners of large estate began to develop their houses and grounds. Much of the parish lies within the estate of Wallington Hall, which lies in the neighbouring parish of Wallington Demesne. The development of the grounds at Wallington were extensive and follies and eyecatchers were built on high points some distance from the hall, including Codger Fort, Liniel Law gateway, and Rothley Castle. In lower lying areas Rothley Lakes were created as well as a deer park.

As new methods developed in farming at this time new farms were built such as Gallows Hill. Recent survey of the pastureland in the parish has shown that medieval ridge and furrow was reused and divided up into narrower strips, presumably to increase productivity. There was widespread use of lime to improve the fertility of the soils in 18th and 19th centuries and lime kilns such as High Hartington would have supplied local farms. The kilns stand next to a tramway that would have transported lime, perhaps to the railway that ran between Rothbury and Scot's Gap. Either side of the railway are numerous quarries, such as Kirkhill and Rothley Middle Shield.

Today, the parish is a much-visited part of the Wallington estate, owned by The National Trust.
N13809
UNCERTAIN