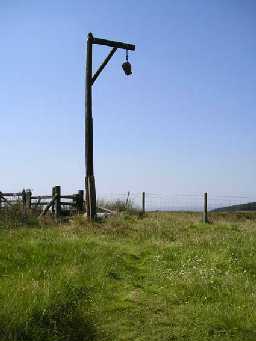 Winter's Gibbet. Photo by Northumberland County Council, 2003.
Hollinghill parish lies in central Northumberland with a landscape ranging from high moorland to stream valleys. Harwood Forest covers a large part of the upland areas. It has a variety of archaeological and historic sites dating from prehistoric times to the 19th century. Many lie on the side of an enigmatic hill called Simonside and part of the parish lies in the Northumberland National Park.

The first evidence of people in the parish comes from the Bronze Age. Here they built their burial and ritual monuments, leaving them to be rediscovered by antiquarians and archaeologists more than 3500 years later. A number of different burial sites have been found including Greenleighton, Spy Law Beacon and Simonside. Some of the cairns have been excavated, revealing pottery and a cremation. Another pot was found in a cist. More evidence of the rituals carried out by Bronze Age people come from the discovery of a stone circle at Fontburn Reservoir and numerous cup and ring marked stones. These strange carvings are found across the parish on outcrops of rock, although most are only cup marks.

Until the Iron Age there has been no evidence of the places prehistoric people lived, except for a possible settlement by the Black Burn. This was a time when there seems to have been an increasing level of conflict, shown in the appearance of defended settlements such as Manside. This well-preserved settlement is protected by three ramparts and two ditches. Inside, there would have been a number of circular wooden houses for an extended family. When the settlement was excavated in 1959 evidence was found for people living here in the Roman period too. Life probably changed very little between these two periods, although the houses were rebuilt in stone. The small farmsteads built in the Roman period are generally squarer than their earlier counterparts and a number survive as earthworks, such as East Greenleighton and Harwood.

Hollinghill lies north of Hadrian's Wall and there are no Roman military sites in the parish. However, an unusual bronze cup found at Harwood in the 19th century shows that some contact or trade took place.

Although nothing remains today, a burial site found in the 19th may have been early medieval in date. It is the only piece of evidence for people living in the parish at this time.

In medieval times Hollinghill was an area well used by travellers along medieval routeways. Their paths were marked by wayside crosses such as Steng and Manside. A beacon stood on Greenleighton Hill in the 13th century and may have been part of an early warning system for Scottish invasions. Nearby, there is a tradition of a chapel at Greenleighton and probably a village too, but the remains are fragmentary and uncertain. Other villages and hamlets may have existed in the parish, such as Fallowlees, where there are traces of medieval ridge and furrow cultivation. The apparent lack of settlement may be connected with the existence of the Forest of Rothbury and the presence of a deer park, created here in 1275.

The medieval period was a time of warfare between England and Scotland and, elsewhere in the County, tower houses were built for protection. However, in Hollinghill there are no examples of tower houses. But, as family feuds and reivers made this a lawless part of Britain in the 16th and 17th centuries, those who could afford it built defensive farmhouses, or bastles, to protect themselves and their livestock; for example at Fallowlees and Morrelhirst. Traditionally, there is said to have been a well in Rothbury Forest called (Reiver's Well N10710}, although no-one knows its location today. A curious survival is Winter's Gibbet, a replica of an old gibbet where murderers were hanged.

The 18th century brought with it a more peaceful way of life and people began to build less defensive houses and took on the new ideas in farming. This led to buildings such as Blagdonburn House and new farm buildings at Greenleighton. The boundaries of land ownership seem to have been formalised and marked at this time; a monumental gateway was built on Liniel Law at the entrance to the Wallington Estate; and a series of boundary stones was erected between the estates of the Duke of Portland and the Duke of Northumberland. Communications were also improving and the Hexham to Rothbury turnpike, opened in about 1751, runs through the parish together with its milestones. Later, in the 19th century, the railway age arrived in this part of Northumberland with the North British Railway, and a fine viaduct was built to carry it over the River Font.
N13746
UNCERTAIN