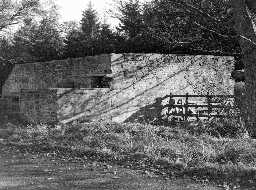 Former Friends' Meeting House at Winnowshill. Photo by Peter Ryder.
Healey parish lies in south Northumberland on the boundary with County Durham. It rises from the north to the watershed of the rivers Tyne and Derwent at Barleyhill and the high fells around Derwent Reservoir. Archaeological remains date from the Roman period to more recent times.

There are no prehistoric remains known in the parish. The earliest remains are a possible Roman road that may run across Edmundbyers Common in County Durham north towards Barleyhill and then to Broomhaugh and Dere Street. Some earthworks in the woods near Minsteracres may be remains of a Roman fortlet.

The first evidence of any settlement in the parish comes in the medieval period. There were hamlets or villages at Cronkley, Fotherley, Espershields and Healey. Much of the information we have about these settlements comes from old documents, such as tax returns and wills. Only a few have any earthworks showing where they once stood and most are now just a single farmstead. There are also records of a property belonging to the Knights Templars called Temple Healey but no one knows exactly where it stood.

In medieval and early post-medieval times the border region of England and Scotland was sometimes a dangerous place to live with battles, skirmishes and raids happening on both sides. Although there are a number of hamlets and villages in the parish at this time there is no sign that a defensive tower was ever built here. Yet, as feuds between border families arose in the 16th and 17th centuries those who could afford it built defensive farmhouses called bastles. One of these once stood on the site of Healey Hall and another is Eastwood House.

Later, as families settled their differences and the region became more peaceful, people began to invest more in their surroundings. In the 18th and 19th centuries country houses such as Healey Hall and Minsteracres were built and parkland created. At Minsteracres, the Silvertop family even built their own chapel. A number of industries also sprang up such as Healey Mill, tile works, saw mill, sand pits, and any number of quarries including a millstone quarry. As the country became more industrialised new approaches to Christianity developed in many of the industrial cities and in time these ideas spread to the North Pennines. Known as nonconformists, this new breed of worshippers built plain and simple chapels, such as Winnowshill Friends' Meeting House, unfortunately now in ruins. Today, the parish lies partly in the North Pennines Area of Outstanding Natural Beauty.
N13355
UNCERTAIN