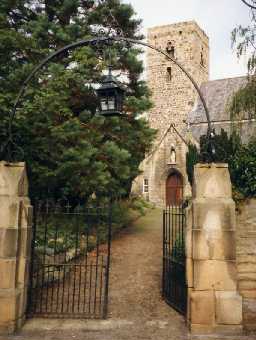 Church of St Mary, Ovingham. Photo by Northumberland County Council.
Ovingham lies on the River Tyne 15 miles upstream from the City of Newcastle. The modern parish covers an area of approximately three square kilometres on a terrace above the north bank of the river. The western boundary of Ovingham parish is the Whittle Dean stream .The southern boundary is the Tyne itself. The underlying geology of the parish is limestone.

The name Ovingham is Saxon, and means `homestead of the sons of Offa', but the area we now call Ovingham was home to people many centuries before it was given this name.

At some time during the Iron Age or Roman periods, farmers lived in round houses and kept their stock in a rectangular enclosure, just west of Horsley Woods. The edge of this enclosure runs along the parish boundary. Perhaps the parish boundary has existed since prehistoric times? The eastern boundary of the parish follows a much more ancient land boundary. During the Roman period, one of the native people in the Ovingham area carved three faces on a large stone. We don't know exactly where it originally stood, but it can be seen today in the church, delivered with a load of stone to be used for repairs.

Anglo-Saxon people settled in the Tyne Valley in the years after 590AD. The present village of Ovingham probably stands on the sites of one or two small farms. The parish church was built in the late Saxon period, but it may have replaced an earlier wooden building, of which there is no trace. St Mary's has the tallest Saxon tower in the Tyne Valley. Ovingham had at least two stone crosses in Saxon times. Pieces of these crosses are preserved in the church.

After the Norman invasion of 1066, the de Umfraville family was given the parish of Ovingham. They built a castle on the south side of the Tyne, in what is now the parish of Prudhoe. In the 13th century the church at Ovingham was modernised. The tower and parts of the nave were the only portions of the building not to be demolished and rebuilt in the Norman style.

The first vicarage at Ovingham was a pele tower. It stood on the site of the present vicarage and was rebuilt three times, after being destroyed in Scottish raids in 1293, 1312 and 1316.

In 1534, during the reformation, Henry VIII's commissioners arrived to close Hexham Priory. They were challenged from the Priory roof by the master of Ovingham dressed in armour. He was eventually hung for leading the protest, and for wearing armour, which was a crime for a monk

After the end of the civil war in 1646, the Ovingham parish registers were begun, recording births, deaths and marriages.
During the 18th century, a pack-horse bridge was built across the Whittle Dean stream. It carried the main road from Newcastle to Carlisle. There was once a tollbooth somewhere in Ovingham, although the exact position of this building is not known.

During the 18th and 19th centuries, Ovingham had a bleach works and a dye works. The chimney of the bleach works still stands at the east end of the village.

A cast-iron bridge, linking Ovingham with Prudhoe, was built across the Tyne in 1883. It replaced a ford, and was built after a young Ovingham miner was drowned crossing the river on his way to work.
N13334
UNCERTAIN