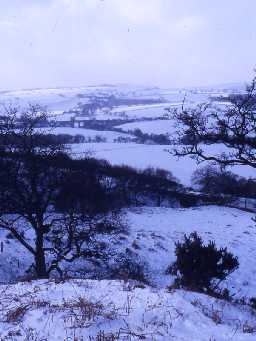 View across Edlingham towards the castle. Photograph by Harry Rowland, 1986. 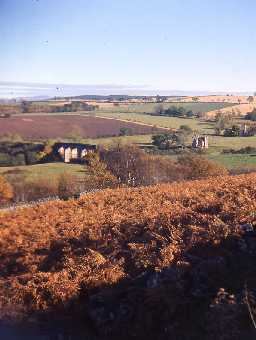 View across Edlingham towards the castle. Photograph by Harry Rowland.
The parish of Edlingham lies in central Northumberland in a landscape of scarps and vales. The village of Edlingham lies at the centre of the parish and is now a small settlement of mainly 19th century farmhouses and cottages. It lies in the valley of the Edlingham Burn that runs through the length of the parish from its source on Rimside Moor to the River Aln. The village is overlooked by Corby's Crags on the east and, with high ground to the west and south too, it is only to the north that the vale widens out to the valley of the River Aln. In Old English, Edlingham means 'homestead of the sons of Eadwulf' and has its origins in the Anglo-Saxon period.

The earliest evidence we have for human activity belongs to the Mesolithic period, a time before farming was introduced and long before the name `Edlingham' had been thought of. A rock shelter at Corby's Crags has provided a range of worked flints of this date and a number of flints were found near Wellhope before the area became afforested. These tools may have been used to hunt animals and prepare food. At this early stage in history people lived by hunting animals and birds and picking wild fruits and grains; farming did not become common until the Neolithic. A polished stone axe from this period has been found at Edlingham and another from near Low Learchild, but nothing is known about where the people who made these tools lived. Some of their rituals can only be guessed at from the decorated stones, known as cup and ring marked stones, to be found at Corby's Crags, Lamp Hill, Lemmington Wood, Millstone Burn and Roughley Wood.

Later, in the Bronze Age, people began to make objects from metal as well as stone. A small axe found at Newtown Farm may have been used as a wedge for splitting timber. Other remains connected with ritual or religious practices have also been discovered in the parish. A number of Bronze Age burials have been discovered, including a cremation in a pottery vessel buried in the floor of a rock shelter. Others have been found in cists at Lemmington Hall and Battle Bridge Farm. Despite all this evidence about Bronze Age people, we have no evidence of their houses or villages in the parish. This may be because these settlements were not of such substantial construction and their remains may not have survived more recent farming practices.

In contrast, the Iron Age is well represented in the parish, with at least five settlements known. Many have survived as upstanding earthworks such as the defended settlement near Rough Castles that is enclosed by a rampart built of earth and stone and a ditch. Another example near Rough Castles seems to have been only half finished as the ditch and rampart on one side were never completed. Two more possible settlements are known from aerial photographs and survive as cropmarks at Edlingham and Edlingham Glebe.

Little seems to have changed in the area during the years of Roman rule. Edlingham lies well north of Hadrian's Wall, the northern edge of the Roman Empire for much of its time in Britain. Most people probably continued to live in the same kinds of homes as during the Iron Age, as is shown at a settlement on Corby's Crags where a Romano-British settlement overlies an Iron Age one. One possible slight difference to these settlements is their overall shape, in the Iron Age they were usually roughly circular, but in Roman times they are often more rectangular. A homestead near Lemmington Branch is just such a settlement. As well as the native settlements, Edlingham has two military sites and the Devil's Causeway Roman road passing through it. Excavations of the fort at Learchild showed that there were two successive forts there. They were probably part of the move northwards into Scotland in the second century AD. The discovery of a marching camp in the 1990s at Edlingham Glebe is probably further evidence of this push north by Roman troops.

Following the end of Roman rule in Britain in the early fifth century, we know there must have been some Anglo-Saxon settlement here as the name 'Edlingham' has its origins in Old English. It was first mentioned in AD737 as one of several villages given to the monks of Lindisfarne. The site of a battle between the Danes and Saxons in AD875 is traditionally held to lie in the parish. More tangible remains lie in the medieval Church of St John the Baptist, itself thought to stand on the site of an Anglo-Saxon church whose outline has been suggested by dowsing. Here, part of an eighth century cross shaft is preserved. Yet, perhaps the most exciting relic of this time is a set of runes carved on a rock in Lemmington Wood.

In medieval times a number of villages are known to have existed at Abberwick, Lemmington Learchild and Edlingham as well as perhaps Newtown. This suggests the area was extensively farmed to support so many people. Indeed, part of the open field system survives at Abberwick and comprises headlands, furlongs and extensive ridge and furrow cultivation. The discovery of a quern near Battle Bridge clearly shows that grain was being processed and was probably grown nearby. However, these were times of warfare and unrest in the borders of England and Scotland and because of this a number of fortified buildings were built, including the fortified manor of Edlingham Castle. The need for warnings of attacks and raids may have also made it necessary to build a beacon.

As the region became more peaceful in the 17th and 18th centuries, growing confidence meant that buildings such as Lemmington Hall were built developing a once fortified tower into a country house. At the same time the parkland was laid out. During the post-medieval period a number of industries developed alongside farming. A millstone quarry was worked on Corby's Crags as well as mining and on Alnwick Moor lies the largest concentration of bell pits in the North East of England. The 19th century saw the arrival of the railway, with the opening of the Cornhill Branch line in the 1880s. A striking reminder of this line, which finally closed in 1953, is the viaduct near Edlingham Castle. Today, Edlingham is probably best known for its castle which is in the guardianship of English Heritage.
N13249
UNCERTAIN