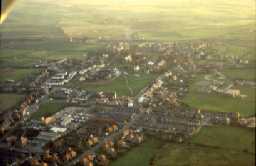 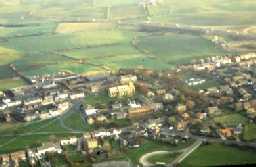 Easington © DCC 2007
The village of Easington lies in East Durham, just two miles from the coast. To the north lies the villages Hawthorn and to the south is Castle Eden. The old turnpike road between Stockton and Sunderland once ran through village, but it has been replaced by the new A19. It was long seen as the 'capital' of East Durham, though its importance declined as the new towns of Seaham Harbour and Peterlee developed in the 19th and 20th centuries.

It was first recorded in 1050 under the name 'Esingtun', which comes from the Old English for 'farmstead of Esi's people'. There is also archaeological evidence for the importance of the area in the Anglo-Saxon period. The remains of a 6th and 7th century cemetery have been found in the vicinity. The cemetery probably fell out of use when the area was converted into Christianity. After this the population were probably buried in the graveyard of the church of St Mary's. Although much of the parish church is 12th century in date, there was undoubtedly an earlier church here, as a carved stone cross of this date has been found here. The church stands on a natural rise; because of this the tower was very conspicuous and was used by sailors as a landmark.

There is also evidence for Anglo-Saxon occupation at Seaton Holme, where the possible remains of a late Anglo-Saxon building has been found. {Seaton Holme D12581} developed into a manor house, and was used as a house by the Bishops of Durham. It is believed to have been the home of Nicholas Breakspear, who became the only English Pope, under the name Adrian IV (died 1159).

In the 16th to 18th century the area remained an agricultural area, and between 1656 and 1665 much of the common land, known as moors, was enclosed and shared between the residents of the villages. The remains of some buildings from this time have been recorded in the village, such as at Low Row. Even with the arrival of the coal mines in the 19th century farming remained important and several windmills are recorded in the area.

During the First World War Easington Village had a landing ground used by aircraft of 36 squadron from 1916 to the end of 1918. Many men of the village, and from nearby Easington Colliery, served in the war and many of them were killed. Their efforts are commemorated on various memorials around the parish, particularly so in a large memorial stained glass window in the parish church of St. Mary, and on an elaborate clock tower in the centre of Easington Lane, commisioned by the War Memorials Committee in 1921.
D6782
The identification of Historic Landscapes in Durham Project; Chris Blandford Associates
Easington Village Atlas Project 2012 - 2015; The Archaeological Practice Ltd