"
You are here: Home / Overviews

Christianity first arrived in the north-east of England during the Roman period. The religion was illegal until AD312, when the Roman Emperor Constantine became a Christian. In this part of England Christianity appears to have been most common on military sites.

The remains of possible Roman churches have been found at the Roman forts of Vindolanda and Housesteads.

These were simple rectangular buildings with curved apses at the west end. Churches have also been found on other forts on Hadrian's Wall, such as South Shields (Tyne and Wear) and Birdoswald (Cumbria). These churches would probably have been mainly used by soldiers and members of their families. It has also been suggested that a tombstone from Cawfields on Hadrian's Wall may have belonged to a Christian.

The most spectacular evidence for Roman Christianity in the region is a round silver vessel, which was found on the south bank of the River Tyne near Corbridge. The rim of the bowl is decorated with a small Christian symbol called a chi-rho, which includes the first two initials of the name Christ in Greek.

Another possible Christian object is a silver cup from the River Tyne near Bywell. It carries the words DESIDERI VIVAS ('Long life to you, Desiderius'). This phrase was often used by Christians in the fourth and fifth centuries and is known on other Christian objects. It is possible that this jug might once have been part of the same hoard as the bowl from Corbridge.

The place name of Egglescliffe in Durham may also include the word 'eggles' which comes from the Latin for church. It is thought that such placenames are signs of very early Christian communities, and probably date from before the Anglo-Saxon conversion to Christianity.

From the late fifth century the north-east of England began to come under Anglo-Saxon control. By the mid-sixth century this had reached North Northumberland.

These early Anglo-Saxon kingdoms were initially pagan, worshipping gods that had been brought over from North Germany and Southern Denmark, such as Woden. However, in AD597 Pope Gregory decided that he wanted to convert the Anglo-Saxons to Christianity, so he sent St Augustine and other monks to Britain to begin the work. Augustine mainly worked in the south of England, but he sent a monk named Paulinus to the north to bring Christianity to the rulers of Northumberland.

The first Northumbrian king to become a Christian was Edwin who converted in AD 626. Although the king was baptised in the south of his kingdom in York, he encouraged Paulinus to travel throughout his kingdom, and many were baptised in the River Glen near the royal palace of Yeavering.

Although many people became Christian we have no remains of early churches built at this time, and the existing native British churches may have continued to be used. In its early years Christianity in England remained weak. Although Edwin was a Christian other Anglo-Saxon kings had remained pagan or quickly given up their Christianity. However, Edwin was killed in battle in AD633. After the short reign of his son Eanfrith, Oswald took the throne. He had grown up in exile in Scotland, an area that was more firmly Christian and had been converted by monks from Ireland. He defeated a Welsh army in a battle at Heaven Fields, where as a sign of his Christianity he put up a large wooden cross before the battle. Because of his background Oswald favoured monks, priests and bishops from Scotland, rather than those, such as Paulinus who had come over from Rome. He sent for a bishop from Iona, an important monastery built on an island off the west coast of Scotland.

Perhaps copying the island site of Iona, he created a monastery for this new bishop on the Island of Lindisfarne. It was also close to Oswald's main palace at Bamburgh. Lindisfarne became the most important monastery in Northumberland, and many important monks and priests were connected to it. Most famous of these was St Cuthbert who became bishop of Lindisfarne in 685. He was famous for his holiness and had spent sometime as a hermit.

Oswald was killed in a battle with the Mercians, an Anglo-Saxon kingdom from the Midlands. Because of his support for Christianity he was soon treated as a saint, and parts of his body were returned to Bamburgh where they were preserved as an important relic.

In the years after the foundation of the abbey at Lindisfarne, the kings of Northumberland and important nobles gave the church land and several other monasteries were established. Churches were also built at important royal sites. However, the remains of these important early churches are few. Perhaps the best example is the possible church from Yeavering, which is only known from archaeological excavation. It was a simple rectangular hall, built from wood. The early church at Lindisfarne was also described as being built from wood.

In the 660s the supporters of the Roman church in Northumberland began to become more powerful again and there were increasing disputes with the supporters of the Scottish church. In 664 these problems were resolved at a meeting at the monastery in Whitby (Yorkshire), and the Roman church won the day. Most of the Scottish priests left Northumberland. The leading supporter of the Roman church was Wilfrid, who was made Archbishop of York. He was given the large estate of Hexhamshire and built an important stone church in Hexham. He was responsible for building the important crypt there, which may have been used as a place to keep relics. At this time other stone churches began to be built.

The best-preserved example of an Anglo-Saxon church can be seen at {Escomb D1775}, where the church is little altered since it was built in the seventh or eighth century. There were still relatively few churches at this time though. They were mainly found close to royal palaces and at the centres of important estates and shires, such as at Gainford, Staindrop and Chester-le-Street. Some of these early churches were built on or close to the remains of earlier Roman remains from which the building stone was often taken. In some cases Roman carvings were even reused. Fragments of Roman inscriptions can be seen in the crypt at Hexham and Roman stones have also been found in the church at Escomb.

As well as the wealthy monasteries and churches there were also some small chapels or hermitages built in remote places, where holy men could pray. St Cuthbert had a Hermitage on the Farne Islands and the chapel of St Ebba at Beadnell may have been another such site.

The Golden Age of Northumbria 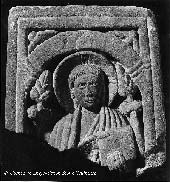 By the early eighth century much of the best land had been given to the great monasteries such as Hexham and Lindisfarne. This meant that the Anglo-Saxon church became increasingly wealthy. Because of their riches these important monasteries became centres of the creation of many beautiful objects.

This period has become known as the Golden Age of Northumbria. Lindisfarne was particularly known for its production of beautifully illustrated books. The best known of these are the Durham Gospels and the Lindisfarne Gospels. Elaborate metalwork may also have been produced at these sites; examples of this include the decorative cross found in the coffin of St Cuthbert in Durham and the small chalice found at Hexham.

The tomb of St Cuthbert, who died in 687, included other examples of Anglo-Saxon arts and crafts, such as a decorated wooden coffin and a portable wooden altar. He was first buried in the church of St Peter's in Lindisfarne, but his body was later moved to Durham Cathedral.

The most visible remains of this Golden Age are the many carved crosses and gravestones found widely spread across the north-east.

The earliest of these stones belong to the seventh century and were just simple gravestones, often marked only with a simple cross. In the eighth century the more spectacular stone crosses, such as Acca's Cross began to be created.

These tall carved stones could have stood inside or outside churches, and may have marked boundaries or been sites of prayer. Most were made from sandstone and stood up to 4m high. Their decoration shows influences from Britain, France and Italy. Scenes from the Bible are common. It is often these crosses that provide the only evidence that a particular parish church had an Anglo-Saxon origin.

However, the Golden Age of Northumberland came to an end with the beginning of Viking raids from the late eighth century. Some of the most important monasteries vulnerable by attack by these sea-born raiders. The monastery of Lindisfarne was removed entirely to Norham to avoid Viking aggression. It eventually moved again and was re-sited at {Chester-le-Street D2150} in the late ninth century.

At first the Vikings were pagans, but rather than just raid they started to settle in Britain, and many became Christians. With the Viking conquest of much of north England, the land held by many churches was taken and given to these new rulers. Although the churches were much poorer, they were often supported by their new Viking lords and many new stone crosses were carved. The Viking settlers also created a new form of carved stone grave monument, known as 'hogbacks' after their unusual shape. Large groups of these hogback have been found at Hexham, Sockburn and Gainford.

In the late tenth century the Vikings lords began to show a renewed interest in supporting the monasteries, which had been so badly affected by the Viking takeover. The monastery of St Cuthbert at Chester-le-Street now had the financial power to rebuild their wooden church in stone and also to build new stone churches on their estates, such as at Staindrop. It was at this time that Durham became an important monastic site, when the monks from Chester-le-Street decided to move to a safer site within the great loop of the River Wear.

When the Normans conquered in 1066 they found a Christian church that had been a powerful and vibrant part of Anglo-Saxon culture in Britain. It had been responsible for creating many of the most spectacular and beautiful remains of this era that we can see today. Although they replaced the Anglo-Saxon bishops with their own men the structure of the Christian church in the north-east remained unchanged.