Tom Moss, a textile technologist with a passion for the history of the English Scottish Border, writes about Elsdon in Redesdale.

Of all the places in Northumberland which abound with natural beauty, yet are steeped in the violent and bloody history of the North Country, none can compare, to my mind, with Elsdon in Redesdale.

I remember clearly my first visit, some two decades ago now, and the delight of standing within such a pleasant place. There is the village green, so commonplace throughout the region. But here the handsome stone houses tend to cluster in places as if in defence of the centre of the village, guarding its lifeblood.

An ancient church, dedicated to St Cuthbert, stands nigh the top of the village green. Here, it is reputed, lie the English dead of the Battle of Otterburn in 1388, discovered in the church alterations in the nineteenth century. There is much debate even to this day about the battle, the confrontation between the premier house of Northumberland, the Percys, and the Scottish army led by Douglas who fell in the battle. Some say the battle was at Elsdon, but it matters not to me. I cannot look at the church without thinking of those brave men who gave all for their country and sleep the peace of eternity in this place. That is what counts for me. They were slaughtered for their birthright and rest in a fitting place.

And behind all this stand the Mote Hills, hoary in age, relevance long outdated, yet testimony to the centuries when Elsdon was a place of supreme importance within Northumberland, the guardian of Redesdale, a wild and violent place in days gone by. On top of the Mote Hills stood the castle the Umfravilles, allies of the Conqueror, who invaded and subdued the lands of the English in the eleventh century. They, we are told, were given William’s sword, to defend the area against his enemies.

And yet there is more to Elsdon. The reason for my visit all those years ago, being a man bent on understanding the history of the Border Reivers, was to see the Pele Tower – and what a Pele Tower stands here.

The Vicar’s Pele might have survived the vagaries of time and man since its building in the 1540s, its upkeep and modernisation, but it is still awesome to behold. Possibly built on the site of an earlier tower, and a hunting resort of the Umfravilles following their move to Harbottle castle, it very soon became a place of refuge for the inhabitants of Elsdon. Here the vicar of the village lived and, should we believe the Reverend Dodgson of the eighteenth century, it was a cold and draughty abode.

It stands sentinel to the village we see today, looks down on all, and transports the viewer in a blink of an eye to a more violent time when men watched and were wary of the next wave of desolation and destitution at the hands of the Border Reivers. Elsdon Pele was a haven, a sanctuary, when the horses’ hooves thundered over the earth and the steel bonnets and swords flashed in the moonlight.

The inmates of Elsdon usually survived the onslaughts and gave as good back. They were an obdurate lot in those days. Their reputation for fierceness lasted long after the demise of the Reivers.

I love Elsdon for its present beauty and its bygone history. It might be two decades since my first visit but even now in my regular sojourns to the place I am still witnessing in my mind’s eye to its history-rich past, the incongruence of days gone, and the seemingly timeless peace that exists there now. 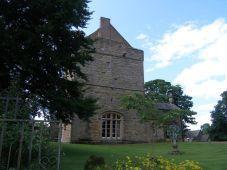