The local broadcaster and architectural historian, John Grundy, chose the remote bastle at Shittleheugh as his favourite archaeological site, he writes:

There are those who would choose Shittleheugh as one of their favourite archaeological sites in Northumberland because of its rather risqué name but I’m not one of those.

I chose it because it’s a bastle house, one of the less well-known bastle houses, relatively un-archaeologied (to coin a phrase) and in a wonderful and characteristically Northumbrian situation.

For those who aren’t familiar with the title, a bastle-house is a description applied to a class of buildings that appeared in their hundreds on the Anglo-Scottish Border in the later 16th century and continued to be built into the 17th century. The word ‘bastle’ presumably comes from the French ‘bastille’ because these are defensible buildings, little fortresses, 30 or 40 feet long, about 20 odd feet wide, two stories high, and with immensely strong walls.

These are all features to be found at Shittleheugh where the walls, made from huge blocks of rough-hewn stone, are over 4 feet thick. The side walls stand to about six feet, the end walls to the full height of the gable. There’s nothing, to my mind, quite like the sensation of getting close to a bastle-house wall. The scale is cyclopean and the roughness speaks volumes for the age in which they were built. Shittleheugh was being built when Longleat was being built and when Elizabethan or Jacobean manor houses were being built to grace civilised lives in a peaceful country. But up here, in the wild northern uplands, the war had been more or less continuous for about 300 years and violence was still endemic, so an architecture emerged to cope with the danger. It was a unique architecture ( assuming that ‘architecture’ is an appropriate word to apply to these extraordinarily primitive structures). They’re unique because the ground floor seems to have been given over to animals which could be driven in and locked up behind the immensely strong walls at the first sign of danger, while the people climbed a ladder to the upstairs room, pulled the ladder up behind them and hoped to hold out until the danger passed. Nowhere else in Britain does this arrangement appear to have developed.

Shittleheugh may actually have been a slightly upmarket version of the type. It seems to have had a little staircase in a staircase tower or porch instead of the wooden ladder which was more normal and the doorway into its ground floor byre, instead of being in the gable end as is the case with most bastles, is in the middle of one of the long sides – a feature it shares with a number of other ‘superior’ bastles. Beyond that, it remains true to type. The ground floor has narrow ventilation slits with boldly splayed jambs possible to improve a line of fire under attack. The upstairs had two fireplaces but only the bold corbelled wall below which supported them remains now.

All of this must sound, I’m sure, awfully ordinary, but believe me, this is an amazing place. There are ruins of other buildings, possibly other bastles, just below it and like many other bastles in this area, it has unexcavated, unexplored, and hugely atmospheric old field boundaries around it. It’s on the lip of a hill, dramatically highlighted from below against the skyline. The view from it is beautiful too, across the valley of the upper Rede to the south and across the Otterburn moors in every other direction – Oh yes, I forgot to mention that it’s on the edge of the British Army’s Otterburn firing ranges, so there is a little extra frisson of excitement involved in visiting it. You feel as if there’s a possibility of danger, much as visitors must have felt when it was first built 400 years ago. It is on a public footpath (I think) so that, if there are no red flags flying to indicate that the army is actively involved in live firing, you are unlikely to get shot … but can you be sure! Ask yourself that. 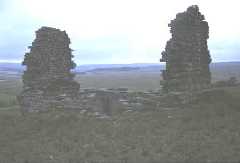