Former Principal Conservation Officer at Durham County Council, David Sparkes was asked to consider which site within County Durham was his favourite.

I found that many examples came to mind. Being blessed with such a variety throughout Durham and its surrounding area and without wanting to select perhaps an obvious choice, a favourite site of mine is Pasmore’s Apollo Pavilion, Peterlee.

As part of the urban planning policy for post-war Britain a social reconstruction of ‘New Towns’ within the UK was formed.  A significant amount of new housing was proposed to be developed on the acquired land.  Peterlee was selected to become a centre for alternative employment to the mining industry.  The proposals required an amount of vision and imagination to be deemed a success.  Victor Pasmore was appointed as consulting director within the urban design process to instil an element of impact vital to the development.

Pasmore’s work derived from an abstract style, where a reference to landscape and architecture was a central reference.  He experimented with relief forms and the layering of materials, which culminated in generating installations with exhibition qualities.  Pasmore was able to consider relationships between spaces, opportunities for variations to occur and ways in which experiencing the space could be manipulated.  This understanding of spatial quality led to his design work within Peterlee, where he was able to explore such possibilities in full scale.

The Pavilion structure was cast on-site from reinforced concrete, minimally decorated with two of Pasmore’s murals, spanned a small lake and connected the separate areas of the development as an integral part of the landscape.  Its simplistic integration into the landscape as ‘functional art’ enabled architecture and artists’ vision to combine.  The structure was named in honour of the Apollo Space Programme as a ‘symbol of adventure, hope and optimism’.

Criticism and lack of support from the local community led to the Pavilion suffering from neglect and vandalism, rapidly falling into disrepair, leading sadly to a general feeling that the structure was in fact an ‘eyesore’ within the development.  However, in 2002, a group was formed to ensure the Pavilions safekeeping and to maintain its future within the area.  The ‘Apollo Pavilion Community Association’ was granted Heritage Lottery Funding in 2008 which led to its careful restoration in 2009 and was established as a Grade II* Listed building in December 2011.

My reasoning for regarding the Apollo Pavilion as a favourite site within the area is in an appreciation of its simplicity and purpose exceeding expectations. Defying the brink of demolition; surging through to restoration and ultimately being honoured on the Heritage list.  The Apollo Pavilion should be duly respected as a rare example of post-war architecture, and remain a proud monument to our history and vision within the North East. 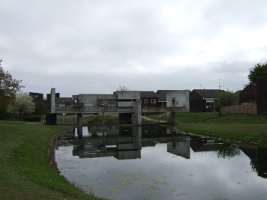