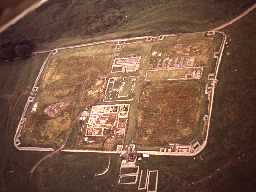 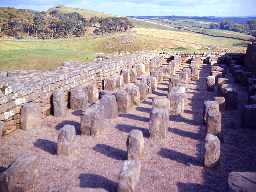 Roman granaries at Housesteads. Photo by Harry Rowland.
The Roman fort at Housesteads, known to the Romans as Vercovicium, occupies the prominent crest of Whin Sill to the west of the Knag Burn. It has wide views to the north and south, being one of the most dramatic and best-preserved Roman sites in Britain. It has produced many important archaeological finds including quantities of statuary, altars, inscriptions, pottery and small finds.

The fort was added to Hadrian's Wall after the broad wall foundations and turret 36b were built, but before the narrow wall (which was eventually constructed on the broad wall foundations) was constructed up to the fort. It is unusual among the forts of the Wall for having an east-west orientation rather than a north-south one. This is due to the limited space at the site. The fort covers an area of approximately two hectares and accommodated a cohort between 800 and 1000 strong. A cavalry unit later strengthened it.

There has been a history of excavations on the fort from 1822 up to 1988. Its remains survive well as upstanding masonry and earthworks and buried features. The walls, gateways and a number of building, including the headquarters building, the commanding officer's house, a hospital, granaries, barracks, workshops and a latrine inside the fort are exposed.

The earliest activity on the site dates to the Bronze Age, and was a Bronze Age pot found beneath one of the barracks, which had probably come from a ridge top burial mound. Post-Roman activity on the fort site includes a bastle house which was built partly over the west tower of the south gateway.