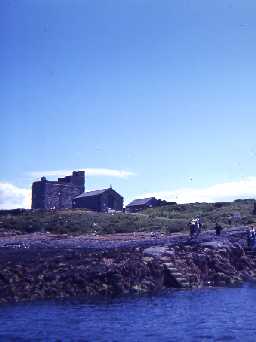 Inner Farne Island. Photo by Harry Rowland.
Inner Farne is one of a group of islands called the Farne Islands, the most easterly outcrop of the Whin Sill. There are four medieval buildings, a well and field system surviving on the island. The buildings include St Cuthbert's Chapel, St Mary's Chapel, Prior Castell's tower and an hospitium or guest house.
Inner Farne is associated with St Cuthbert who lived here in the seventh century AD and later returned here to die. Bede, writing in about AD705, records that Cuthbert built a cell, landing place and guest house, and grew barley on the island. Although a number of hermits followed Cuthbert to the island, it had lost its religious character by the 12th century. The last hermit was Thomas de Melsonby, Prior of Durham, who died here in 1246. A small Benedictine monastery was established here in 1255 and existed until the dissolution of the monasteries in 1536.After this they were granted to the Dean and Chapter of Durham. A succession of tenants followed until Archdeacon Thorp bought them in 1861. The National Trust acquired the islands in 1925. This is a Scheduled Monument protected by law.
N5880
Early Medieval (410 to 1066)
Medieval (1066 to 1540)
Scheduled Ancient Monument
FIELD SURVEY, National Trust survey: the Farne Islands 2010; Archaeo-Environment Ltd