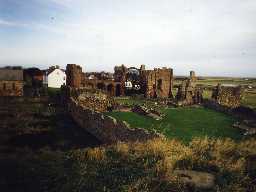 Lindisfarne Priory, Holy Island. Photo by Northumberland County Council.
This is the site of the Anglo-Saxon monastery of Lindisfarne and the priory that followed it in the 11th century. Except for a number of eighth century carved stone no remains of the Anglo-Saxon monastery have been found. Most knowledge about the monastery comes from seventh and eighth century historic records. The monastery was founded in 634 by Aidan, a bishop from Iona. Its most famous bishop was St Cuthbert who ruled here from 685 to 687. In 793 the monastery was attacked by Vikings. Attacks continued until 875, when the monks moved to safety to Norham and then Chester-le-Street and finally Durham in 995. In 1081 the monastery refounded a Priory on the island. The visible remains are all from the Priory which was built in the end of the 11th century and extended in 1140. It is mainly Romanesque in style, though there are a few Gothic windows. The ruins of the church are still quite well preserved, and the remains of the presbytery can also be seen. The traces of the cloister which can be seen, date to the late 12th to 13th century. A range of buildings next to the cloister are also visible, and a larder with a stone roof can be seen. To the east, the infirmary was enclosed by a fortified wall, with a tower in the north-east corner. The function of the building within this wall is not known. This is a Grade I Listed Building and a Scheduled Monument protected by law.
N5346
Early Medieval (410 to 1066)
Medieval (1066 to 1540)
Conservation area
Listed Building
Scheduled Ancient Monument
EXCAVATION, Excavations on Lindisfarne 1962; HOPE-TAYLOR, B K
FIELD OBSERVATION, Ordnance Survey Archaeology Division Field Investigation 1968; B H Pritchard
HERITAGE ASSESSMENT, English Heritage Coastal Estate: risk assessment 2011; English Heritage
EVALUATION, Lindisfarne - The Holy Island Project 2016 2016; DigVentures