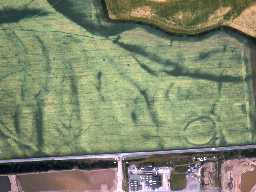 Aerial view showing cropmarks of West Plain henge. Photo © Tim Gates.
West Plain henge, also known as the Coupland henge, was discovered by aerial photography in the mid-20th century. It was seen as a cropmark, although there are still slight traces of an earthwork visible on the ground. The henge has two entrances opposite each other and study of aerial photographs revealed that there are two narrow ditches passing through the entrances forming a droveway. The site was partly excavated in the 1990s; at the north entrance slots and pits were found and are thought to have been used for setting posts and fences in. Some sherds of prehistoric pottery were also found and are of a type known as Grimston ware, from the early Neolithic. Some samples taken from the henge were tested by radiocarbon dating and gave a date of about 3800-4000BC suggesting this is one of the earliest such monuments in Britain. It has also been suggested that some of the pits inside the henge may be part of a slightly earlier settlement of early Neolithic date on the same site. The droveway is the latest feature on the site and was probably used to move livestock. This is a Scheduled Monument protected by law.
N2025
Neolithic (4000BC to 2200BC)
Early Neolithic (4000BC to 3300BC)
Bronze Age (2600BC to 700BC)
Scheduled Ancient Monument
FIELD OBSERVATION, Ordnance Survey Archaeology Division Field Investigation 1964; N K Blood
FIELD OBSERVATION, Ordnance Survey Archaeology Division Field Investigation 1967; D King
GEOPHYSICAL SURVEY, West Plain 1978; HARDING, A F
FIELDWALKING SURVEY, Coupland Enclosure and associated droveway 1995; WADDINGTON, C
EXCAVATION, Coupland Enclosure and associated droveway 1997; WADDINGTON, C