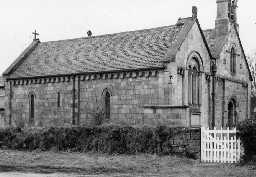 The earliest known sites known in the parish are Bronze Age and both are funerary sites. Ellsnook tumulus revealed a cist and some pottery as grave goods when it was excavated in 1921. Another cist may have been found at Cold Embleton, although the antiquarians who discovered it did not collect any grave goods. The interred remains might originally have been either cremations or inhumations.

The oldest settlement in the parish is a possible Iron Age settlement at Cold Embleton. It may have continued to be lived in into the Roman period with little change. However, no Roman finds have been made.

Nothing else is known about the Rennington until the medieval period when several small hamlets and villages grew up here, including Broxfield, Rennington, Rock and Stamford. Traces of a 13th or 14th century house are incorporated into Rock Hall which was later converted into a tower house.

In the post-medieval period Rock Hall was further altered with work by various architects, including John Dobson. Elsewhere, villages were replaced by a single farm as developments in agriculture progressed, such as at Broxfield, and the estate village at Rock. Fine new farms were also built at Broxfield and Rennington Moor, incorporating the latest ideas in farming practice. Lime kilns were built at Rock Midstead and Rock Mill to provide lime to enhance soil fertility.
N13831
UNCERTAIN