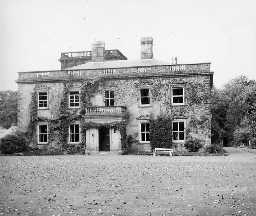 Eshott Hall. Photo Northumberland County Council, 1956.
Thirston parish lies in the lowlands of south-east Northumberland with the River Coquet forming a natural boundary along the north side. There are a range of remains within the parish from the Mesolithic to modern era.

Finds of flint knapping waste at West Moor Farm and Thirston, show the earliest remains in the parish to be Mesolithic. Mesolithic people probably followed plant, animal and fish resources on an annual or seasonal basis so it is unknown how long they may have spent West Moor ' it may have been only a couple of hours, days or perhaps longer-term.

A Neolithic presence is known from two stone axes found near Felton and near Thirston. Perhaps they were used to fell trees or clear away undergrowth.

In the Bronze Age only one possible site is known. A barrow was excavated but contained an iron spearhead that may mean the burial is rare evidence of Iron Age or later pagan burial. A series of enclosures that show up as cropmarks on aerial photographs may be Iron Age settlements and an enclosure near Catheugh might be a Roman farmstead.

The medieval period has more definite traces of settlement. Eshott Castle was built in the medieval period and probably had some kind of settlement clustered around it housing the owner's estate workers. A medieval pottery kiln near the castle would have provided goods to nearby settlements and is a rare example in North East England outside of a town. The earthworks of a deserted medieval village lie at Bockenfield and a small hermitage once stood near Helm.

Eshott seems to have escaped the effects of border raids carried out by reivers in the 16th and early 17th century. The later 17th century saw an earlier building incorporated into Bockenfield Farmhouse for the Heron family, decorated with pilasters with pineapples on top and the building of the original Eshott Hall. In the 18th and 19th century, industry and farming developed with a clay tilery and corn mill at Thirston and a coalmine at Eshott Colliery. A fine new farm was built at Hemelspeth, reflecting the changes that were taking in place in agriculture at this time. Some of the wealth from these ventures was spent on houses such as Eshott Hall, which was much altered in the 19th century, and Thirston House.

As a reminder to more recent conflict there is a range of surviving World War II (1939-45} structures, including three pillboxes overlooking parts of the Coquet in a stopline at Catheugh, West Moor and West Thirston. An airfield was also built at Eshott as a training school for pilots and is still in use today.
N13823
UNCERTAIN