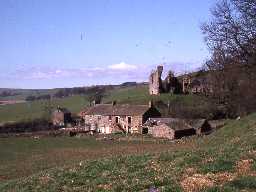 View of Thirlwall Castle. Photo Northumberland County Council.
Thirlwall is a small parish in west Northumberland with the River Irthing on its western edge forming the county boundary with Cumbria. The parish is a mix of upland grass, heather and marshes with some forestry and only a small lowland strip along the Tipalt Burn.

Prehistoric sites are unknown in the parish and the oldest remains are Roman military ones. The Stanegate Roman road runs through the parish on its route from Carlisle (Cumbria) to Corbridge Red House Farm fort. The road is thought to date from the first century AD and was built before Hadrian's Wall. This section of Hadrian's Wall is made up of the Wall itself, milecastles and turrets, with the vallum and Military Way behind. The exact location of some of these features has not been discovered. Two temporary camps at Chapel Rigg and Crooks Camp could relate to the construction of the Stanegate or Hadrian's Wall, or be earlier or later than both in the absence of excavation.

Some of the Roman sites may have been occupied into the early medieval period but so far no evidence has been found in Thirlwall.

Medieval sites are much better known in the parish. Place name evidence is important here with the element 'shiel' indicating the role of transhumance. A cluster of shielings lie along the south bank of the River Irthing. Small farmsteads, built with turf walls, were built in the medieval and early post-medieval period, such as at Bell's Brae. Only one permanent settlement grew up in the parish, at Thirlwall. Here, a castle was built in the 13th or 14th century as a measure against Scottish attacks. It continued to provide defence into the 16th century and was garrisoned by the Scots in the Civil War.

As more peaceful times came to the region in the 18th and 19th century developments in agriculture were made. Lime was used to improve the land and made in kilns such as Gapshields lime kiln. The railway came to the parish in the 19th century and several buildings still stand, including the stationmaster's house, railway bridge and Railway Terrace.
N13782
UNCERTAIN