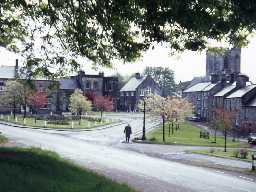 Rothbury town. Photo by Harry Rowland.
Rothbury is a small market town, approximately 10 miles south-west of Alnwick. Today, it straddles the River Coquet but before the introduction of the railway in 1870, the town occupied only the north bank of the river. The town is situated at the neck of a narrow valley, evidently selected because it offers a sheltered location. A bridge across the Coquet was first recorded in 1616 but it is almost certain that this was not the first crossing. A ford point lies a little upstream from the bridge where a footbridge now crosses the river.

Prehistoric settlement at Rothbury occupied the higher ground to the north of the modern town. The most important site is probably the Iron Age hillfort at Old Rothbury which was surrounded by two ramparts. There are also several possible Bronze Age burial mounds nearby. One of these cairns was used in the medieval period in part of a traditional game of football. A ball was ceremonially thrown in the air on the cairn at the beginning of the game between Rothbury and Thropton held on Shrove Tuesday. The area around Rothbury is also notable for its surviving traces of prehistoric carved cup and ring marks, such as those near West Hills Camp.

As well as these prehistoric sites, a number of early tools have been discovered in the parish. Two Neolithic stone axes have been found, though their precise origin is not clear. A bronze axe was also discovered in the early 19th century. The noted local historian, David Dippie Dixon, also found many flints of Mesolithic, Neolithic and Bronze Age date in the area, but he did not record precisely where he found them. Other remains which do not have their origins accurately recorded is a large group of Bronze Age pottery, which was almost certainly the remains of an extensive burial site, possibly placed in one of the stone cairns to the north of Rothbury.

Rothbury lies far to the north of Hadrian's Wall, the northern frontier of the Roman Empire for much of the first four centuries of the first millennium AD. This explains why there is little evidence for any changes or signs of contact during the Roman period. For most of the early inhabitants of the area life is likely to have continued in the same way.

There are equally few remains from Anglo-Saxon Rothbury, though as the name of the town is of Old English origin there must have been a settlement in the area at this time. However, one of the few objects that remains to be seen is of great importance. The Rothbury Cross was found in 1849 when part of the church was demolished. It probably dates to the early ninth century and is a clear sign that an important Anglo-Saxon church once stood here. It is similar in form to other Northumbrian crosses, such as those from Bewcastle and Ruthwell. Part of the cross is now used as the stem of a font dating to 1664.

Although none of the current church dates to the Anglo-Saxon period it is thought that it stands on the site of a double Anglo-Saxon church. Originally two churches stood in a line, connected by the current church tower. The western church was demolished in the 18th century, and its remains are believed to run beneath and beyond Church Street.

In the years following the Norman Conquest the town began to develop in size, though there is little evidence for its precise area at this time. There were probably two main rows of buildings, either side of the market place. A Norman castle was built here, probably on land south-west of the church, in an area which was turned into part of the graveyard in the mid-19th century. The castle had remained inhabited until about 1850 and was demolished in 1869. It sat on the highest part of a rise in the ground, around the south side of which the River Coquet flows in a shallow bend. The rise overlooks a long stretch of the river valley to the west, and would do so to the east but for the presence of modern buildings on that side. To the north it commands rising wooded slopes beyond the town. The site does have defensive properties but there are no above ground remains to be seen.

In common with many of the smaller towns of the border marches, Rothbury suffered from the disruption of the Scottish Wars and border raids that continued into the 16th century. The town developed as a small market town in the medieval period and has continued to serve that function to the present day. In the 18th century, four cattle fairs were held each year and Rothbury acted as a market centre for the towns lying to the east and west of it. In the 18th century, the road from Hexham to Alnmouth was turnpiked and Rothbury, lying on this route, benefited from the resulting through-trade.

Several disastrous fires in Rothbury, in 1738, 1782 and 1785, destroyed many 16th, 17th and 18th century buildings. In 1788 the town had a fire engine, kept in the church porch, in an attempt to prevent further destruction and this was still in action in 1903. While one or two of the older houses were restored and modernised in the 19th century, most have been swept away.

It was not until the middle and later part of the 19th century that the town experienced any expansion. At this time William Armstrong's establishment of the nearby Cragside estate, the opening of a rail link in 1870 and subsequent creation of a large livestock market near to the railway station boosted the economy. In the later part of the 19th century it also became popular as a health resort.
N13475
UNCERTAIN