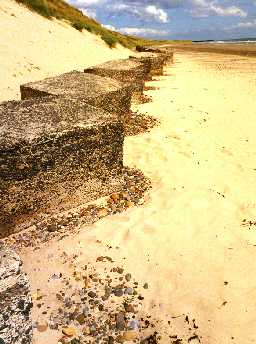 More than 6000 years ago, during what archaeologists call the Neolithic period, people must have travelled through and lived and farmed in the area we now know as East Chevington. Some of the tools found here are made of stone brought from Langdale in Cumbria. One of these axe heads was found recently at Maiden's Hall Opencast mine.

Between 3000 and 4000 years ago, during what archaeologists call the Bronze Age, people buried their dead with elaborate funeral rituals, which included creating stone-lined graves called cists, leaving pots and other objects in the graves and building stone mounds known as cairns over graves. Several pots found at Broomhill in the past came from graves like this.

During most of the prehistoric period, the coast would have been slightly further east than it is today. Objects such as the flint flake found at Togston Links and other flints found on the beaches of East Chevington would have been lost or discarded by people who were in the coastal countryside rather than on a beach or dune.

In the Roman period, many native people continued their lives as they had done before the invasion. All that can be seen of this period today in East Chevington are cropmarks of a native settlement on an aerial photograph.

Woodside Farm is an example of a planned farm, built in the 19th century according to the latest ideas about farming. Woodside Farm replaced an earlier farm of the same name, shown at this location on a map drawn in 1769, which may have been in existence since the medieval period.

A blacksmith's workshop is shown at East Chevington on the Ordnance Survey map of 1866.

During the World War II, various defences were based in East Chevington. An anti-aircraft artillery site protected the airfield at nearby Acklington and a lookout post was built at Hadston Carrs to watch for approaching air and sea attacks. On the beaches anti-tank defences were installed in the form of large concrete cubes. Once these defences stretched up the entire Northumberland coast and, although some have now been cleared away, they can still be seen at Hadston Links.

Extensive opencast mining in East Chevington in the 20th century destroyed archaeological evidence that could have told us more about the lives of people who lived here in the past. However, enough has survived to show that people have lived here throughout much of human history.
N13388
UNCERTAIN