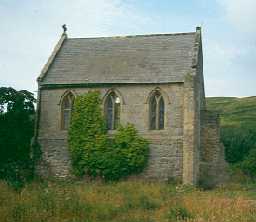 Biddlestone Hall chapel, Biddlestone. Photo by Northumberland County Council.
This building began its life as a medieval tower house and is first mentioned in a survey of 1415. It belonged to the Selby family and was part of a more extensive fortified manor house. By the 17th century the tower had been incorporated into a larger manor house which itself became part of a large Georgian house in about 1800. In the 19th century a Roman Catholic Chapel was created within the upper floors of the tower and in World War II part of the basement was converted into an air raid shelter and an Anderson-type shelter built inside. The tower is built of stone and much medieval masonry is visible on the north and west sides right up to the eaves. Inside, the basement has a characteristic barrel vault and several other medieval features are visible including a doorway. The plan of the tower is unusual because it is elongated and the main entrance lies in a gable end, a feature more often seen in later bastle houses. This is a Scheduled Monument and a Grade II* Listed Building protected by law.
N1108
Georgian (1714 to 1830)
Second World War (1939 to 1945)
Medieval (1066 to 1540)
Listed Building
Scheduled Ancient Monument
FIELD OBSERVATION, Ordnance Survey Archaeology Division Field Investigation 1957; A S Phillips
FIELD OBSERVATION, Ordnance Survey Archaeology Division Field Investigation 1970; B H Pritchard
FIELD OBSERVATION, Ordnance Survey Archaeology Division Field Investigation 1976; S Ainsworth