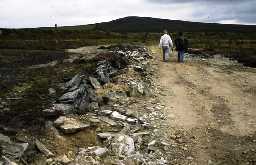 Ramshaw (Wear Valley) © DCC 2007
The village of Ramshaw lies just to the south east of Edmundbyers. The earliest evidence of occupation comes from the area around Sikehead Dam. A small Mesolithic flint tool was found here. This may have been used by one of the first settlers in this area. They would have lived by hunting wild animals and gathering wild fruit and plants.

By the Neolithic period the first farmers had probably began to clear the surrounding land for their simple, small fields. However, they have left no remains in the area.

Sadly, we know little about the area in the Iron Age or Roman period. In the post-medieval period lead mining began to become more important in the area. A large hill of lead slag can be seen at Bale Hill, an area where there are 19th century records of lead washing and dressing. Other remains relating to lead working can be seen in the area. The remains of a 19th century engine house can also be seen. It probably powered a water pump to keep the mines as dry as possible. In the mid-20th century coal mining also took place in the parish. A colliery was worked from 1942 until 1959, though it never employed more than a couple of hundred workers.
D6867