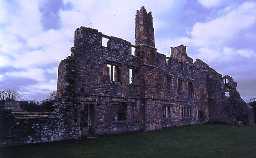 Egglestone Abbey © DCC 2007
"The reverend pile lay wild and waste,
Profaned, dishonour'd, and defaced,
Through storied lattices no more
In softened light the sunbeams pour,
Gilding the Gothic sculpture rich
Of shrine and monument, and niche.
The civil fury of the time
Made sport of sacrilegious crime;
For dark Fanaticism rent
Altar, and screen, and ornament,
And peasant hands the tombs o'erthrew
Of Bowes, of Rokeby, and Fitz-Hugh."

Egglestone Abbey was founded in the reign of Henry II1189 by monks from Easby Abbey near Richmond in Yorkshire. These monks belonged to the Premonstratensian order, which had been founded by the St Norbert in Prémontré in France. It used rules similar to those used by Augustinians, but made stricter. They wore white habits, rather than the black robes used by Augustinians. It was never a wealthy abbey

Although the original buildings were of later 12th century date, the church was rebuilt in the 13th century, and it is the ruins of this building that can still be seen. Only the north and west walls of the early church still survive. Several stone grave slabs of polished limestone can still be seen within the church. One commemorates an abbot; another remembers Thomas Rokeby.

The abbey was dissolved in 1540. Shortly afterwards the church tower was demolished as it spoiled the view from the old monastic buildings which had been turned into a house. The site of abbey was taken over by Robert Strelley, who was given the land by Edward VI in 1549.

As well as the ruins of the abbey, which are now under the care of English Heritage, the site of the abbey's {Water mill D982} is known, and a recent survey on earthworks around the abbey has recorded the remains of hollow ways, ridge and furrow and a possible fishpond.
D6787
Heart of Teesdale Project Heritage Audit; North of England Civic Trust