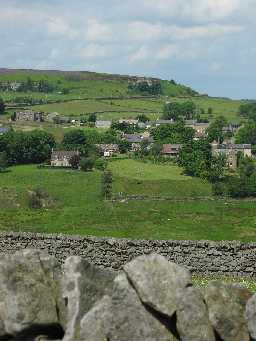 Like many upland areas of the north-east there are good prehistoric remains in the area. Flint tools of unknown date have been found in the area. It is likely that some of these may date to as early as the Mesolithic period when small hunting parties from lowland areas may have come up to these upland areas to hunt wild animals. However, by the Bronze Age people were beginning to settle here permanently, and the graves of these early farmers have been found at {Burnhope Bridge D2223} and other sites. There are also the remains of several small earth platforms, such as one at Top Stonewhich may be the remains of Bronze Age or Iron Age settlements. It is likely that these kind of settlement were used throughout the Roman period, as there is little evidence that life in this area changed once the north-east fell under the control of the Roman Empire in the 1st century AD.

Little is known about the area in the Anglo-Saxon period, though it is clear that there must have been a settlement here by the 11th century, as the name 'Edmundbyers' comes from the Old English for 'Eadmunds byre or barn'. The village itself was first recorded in the early 12th century in the Bolden Book. By this time the {church of St Edmund's D14147} had been built. Edmundbyers was not the only settlement in the area, and the remains of a medieval settlement can still be seen in the form of house platforms and field boundaries at Pedam's Oak.

In 1673 several women from Edmundbyers and the surrounding area were tried at Newcastle Assizes for various acts of witchcraft. No record of the outcome of the trial has been found (1).

In the post-medieval period the area remained predominantly a farming area, though the remains of a 16th century iron smelting mill can be at {Feldon D2220}. from the 19th century leadmining became increasingly important, and lead mines are recorded at {Burnhope D3036} and a mine shop is known as {Eudon Groove D3035}.

However, the leadmining industry died out in the first half of the 20th century, and the area has returned to being a quite rural backwater, though with the rising importance of tourism in the North Pennines, who knows what future awaits the village?

Those of the village who served in the First World War and WW2 are commemorated on a memorial roll of honour plaque in the {parish church D36981} of St. Edmund.
D6785
The identification of Historic Landscapes in Durham Project; Chris Blandford Associates