Place where the stars and planets of the solar system can be observed. Examples include that at Westerton, County Durham and Sharpe's Folly, Whitton, Northumberland of the 18th century AD.

This was the language spoken by Anglo-Saxon settlers of Northumberland. It became the modern English language we speak today.

This was the language spoken by the Viking settlers of Northumberland. It is related to the modern languages of Scandinavia. Old Norse words are often found in modern place names in the North East.

Where a mineral vein is just beneath the surface a large trench called an open-cut can be used, rather than going to the expense of a level. These may become very deep and long if the geological conditions are suitable. They are usually assumed, like hushes to be a feature of early mining - but they are hard to date precisely.

This was the Medieval field system. There was the ridge and furrow - but they were few, if any, hedges or walls dividing the land up for ownership. Some Medieval open field farming is still carried out at Laxton, Nottinghamshire, where the land farmed is still annually decided in a 'court'.

A house consisting of a single storey hall with two storey domestic ranges attached to either one or both ends.

The mining of materials, (such as coal or ironstone), which involves taking off the topsoil and covering materials above the material sought. The material is then extracted without recourse to underground working. After the working out of the material the excavation spoil is used to fill the large hole caused up.

A private family or institutional chapel for only a few selected worshippers, e.g. a local manor house might have one for the lord and his family. 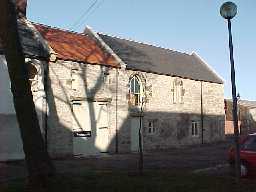 Britain's national mapping agency. It was formed for military purposes in the Napoleanic Wars (1790s-1810s AD). The Ordnance Survey is responsible for producing accurate maps, as places change. They frequently note archaeological and historical information.

A geological term referring to an area where an ore type or types, (basic compounds for metals and chemicals can be found). Much of the North Pennines is an
orefield for Barium (see Barytes and Witherite), Lead (see Galena), Nickel (Ni) and Zinc (Zn).

A large stone which has been set vertically into the ground.

A field beyond, or separated from, the enclosed land about the homestead; an unenclosed or unexplored tract.

A term used by shepherds to signify a free passage for sheep from enclosed pasture into open grounds or common lands.

A wheel driven by water passing over it, forcing curved blades that hold it down by the force of gravity. (Compare with an undershot wheel).

A 19th century Catholic revival within the Church of England.