This term strictly refers to the whole of Roman frontier works, such as Hadrian's Wall. However, it is usually used to describe a wide, steep-sided and flat-bottomed ditch, flanked by two regularly shaped mounds of the material excavated. The ditch was about eight metres wide at its top and 2.5m at the bottom. Its depth was originally near two metres. The Vallum is unparalleled on the other Roman frontiers of the Empire. The precise function of the Vallum is unknown - though both administrative/logistical and defensive theories have been put forward. Indeed it could have been multi-purpose - though there has been a revival in the defensive arguments - but this cannot be the only reason, for their positions where it easily overlooked.

The Vallum was clearly of importance. It has been traced for most of Hadrian's Wall - though it didn't run down some steep slopes, such as Poltross Burn, Northumberland, and ended between Benwell and Newcastle forts. It was dug where the northern ditch was left, at Limestone corner. The ditch was crossed by causeways at the forts, whilst the mounds were cut through. Such causeways called 'crossings' would be guarded as gateways, as at Benwell, Tyne and Wear. The Vallum was a late addition to the Hadrian's Wall scheme - being dug from the central sector outwards it needed to veer sharply around Rudchester fort, Northumberland- even when that fort was itself an addition - and was built over by the later Carrawburgh fort, Northumberland and vicus, (see vicus), along Hadrian's Wall. 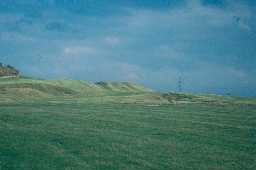