A cup-mark is a roughly circular depression pecked and then ground into a stone. These may be seen singly, in lines, or as the basis for further patterns, called cup-and-rings, so as to cover a whole or portion of rock. The depth of cup-marks alone also varies. Such marks are found predominantly on the sandstone and limestone rocks of Northumberland and Durham, mostly (but not exclusively) in the uplands. An andesite example is noted at West Hill, near Kirknewton, in the Cheviots. They are found elsewhere in Britain - such as the west of Scotland and Yorkshire in abundance, but limited elsewhere.

The reason, or reasons, behind these carvings is unknown. Various suggestions have been put forward since early antiquarians identified them as prehistoric; including maps of the world, maps of the stars, sites where fat was set alit for religion, records of ownership or boundaries and so on. Parallels to other forms of prehistoric art have been drawn, as have parallels from tribes remote from western European life. Despite the multiplicity of the suggested ideas there are common features in the setting of the 'art' forms - they are usually on highland overlooking land thought to be suitable for grazing. However, it is noted that there the flat tops to some cliffs have no cup-marks on, whilst the vertical sides do and vice versa, as at Morwick, Northumberland.

Equally debateable are the dates of this 'art'. Stones with such are found in Bronze Age cists as capstones and the sidewalls (sometimes facing the central portion, sometimes not), (numerous examples), in a henge pits at Milfield, in barrows, cairns, Edlingham and Ketley Crag rockshelters and Scottish souterrains. Sometimes they are within an intentional placing in a kerb. Also they can be seen upon standing stones, as at Matfen. In all cases of sometimes, they may also be absent or sometimes the opposite to before. Some think that they were deliberately used in these cases - which suggests a Bronze Age date, others favour Neolithic dates with other parallels, based upon the state of the Bronze Age examples. All that can be stated is that they seem to have lost their concentrated currency in the middle Bronze Age.

There are vigorous arguments for all sides regarding their meaning, dating and placing. It is unlikely that all the answers can be gained - though many new examples are found almost annually in survey work. They puzzled antiquarians, continue to puzzle archaeologists and will do so for some time yet. 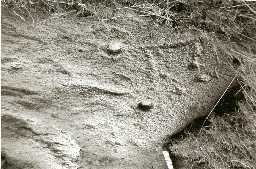