Permanent limekilns were built of stone or brick. They were circular in plan. At the base of the kiln was one or more arched openings called a draw arch where the fire at the bottom of the kiln was fed and from which the processed lime was removed. Kilns were loaded from the top, so they were often built into a hillside or had an earthen ramp constructed above them along which a waggonway could run to supply the coal and limestone, which were tipped onto the fire below. The limestone and coal was layered in the kiln pot and heated to temperatures in excess of 1000 C. The heated lumps of lime produce calcium carbonate or quicklime. This was highly volatile and a number of ships transporting quicklime caught fire because the cargo had come into contact with water. To avoid this problem farmers would leave quicklime in piles at the edge of fields, allowing the quicklime to slowly absorb moisture from the atmosphere. Once this process had been completed, a product called slaked lime resulted and this could then be spread onto the field in order to neutralise acidity in the soil and break up heavy clay soils. 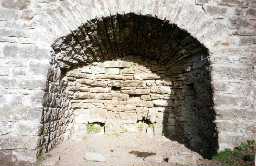